Posted on September 1, 2015 by biglychee

It seems at least someone in Hong Kong made use of the Ashley Madison website. The city’s Democratic Party recently hooked up with Hong Kong and Macau Affairs Office deputy director Feng Wei for a discreet no-strings bout of constructive exchange of views in a spirit of mutual respect.

To opposition militants, this is befriending the devil. To pragmatists, it would be pointless to pass up an opportunity to make the pro-dems’ case to a Mainland official. True – with elections coming, they need to be mindful of Beijing efforts to divide and weaken the pan-dem camp. But that could go both ways. The HKMAO has a tradition of rivalry with the 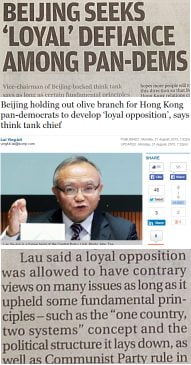 locally based Liaison Office, which is openly acting as Chief Executive CY Leung’s puppet-master and sees the whole opposition as untouchable lepers.

To Beijing, differentiating between the militants and the pragmatists might not be a calculated (indeed predictable) ploy to split the pro-dems so much as an attempt to come to terms with the existing divide in the camp. At one end of the pan-dem spectrum, groups like the LSD and People Power openly call for the overthrow of the Communist regime. At the other end, the DP and fellow moderates can live with the one-party state so long as it grants Hong Kong autonomy and democracy. While full democracy is clearly incompatible with one-party rule, the DP seem pretty reasonable compared with a younger generation of Hong Kong radicals, who disown ‘China’ – whoever runs the place – and claim the city to be sovereign. Even if the Liaison Office sees all pan-dems equally as an enemy to be crushed, the HKMAO could have cause to be more subtle.

‘Subtle’ by their standards, that is. Just in case DP leaders like Emily Lau risk are not sufficiently seduced by the HKMAO’s come-ons and promises of cuddly warmth and intimacy, along comes pro-Beijing academic Lau Siu-kai with his own blandishments. He says the Central Government would like the DP to be a ‘loyal opposition’. This he defines as a group that is ‘allowed to have contrary views on many issues’ provided it accepts the Communist one-party structure. Who can resist such sweet talk?