After making dozens of arrests, Chinese authorities get an array of reporters, bankers and others to confess to rumour-spreading and illegal trading. Caijing journalist Wang Xiaolu admits responsibility for ‘inflicting huge losses on the country and investors’. So the story is that these individuals caused the recent stock market crash, and Xi Jinping and his administration are just innocent victims along with everyone else.

This is how to do blame-shifting: implicate a generous-sized group of unconnected people, extract not only confessions but remorse, and pile on the shameless lies until your propaganda-fed public have no sense of perspective. Whether it’ll work is another matter. But at least the leaders in their bubble will feel they’ve kept some face.

water scare broke out a few weeks back. In their panic to offload responsibility, our valiant officials found a scapegoat in the form of one Lam Tak-sum, a plumber. They could at least have had the wits (let alone decency) to find someone who isn’t in a wheelchair – but oh, no… What a bunch of amateurs.

They have more to panic about. At any given moment, parts of China’s United Front in Hong Kong will be out of step – this is inevitable in an unnatural alliance of born Communist Party believers, co-opted tycoons, opportunist politicians, shoe-shiners and plain losers. But Chief Executive CY Leung seems to be testing the pro-government camp’s unity to its limits. Among pro-establishment lawmakers to go off-message in the last few days are Priscilla ‘Rat Queen’ Leung, who has criticized the administration over the lead crisis, and James Tien, who has accused the government of interfering in Hong Kong University’s internal affairs. Meanwhile, a semi-senior Beijing official has held private discussions with members of the opposition Democratic Party.

The target here is not just CY Leung but Beijing’s local Liaison Office, which over the last couple of years has assumed more control within the Hong Kong power structure in order to apply Mainland-style bullying, smearing, manipulation and other tactics to crush opposition forces. These crude attempts have been polarizing, leaving the opposition intact, while causing greater divisions within the loyalist camp.

Tsang was born into the Communist faith, while CY is a pre-1997 convert and zealot. There now seems to be a conflict along these lines, between the local traditional patriots and the CY-Liaison Office bloc. This suggests that the top policymakers in Beijing are not impressed with Hong Kong’s management since 2012, bungling the political reform package and ‘losing’ the post-colonial generation. No-one outside China’s ruling clique can be at all sure what is happening, but we do know that Hong Kong’s DAB/FTU milieu, of which Tsang is a/the leader, is the CCP’s local front, and by definition does not pick the wrong side. 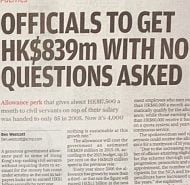 And to add to the CY administration’s woes – we now learn that Hong Kong’s better-paid civil servants are getting a monthly, no-strings allowance equivalent to around 80% of median household income, because, er, well… no-one seems to know.