And still no-one knows what a provost is 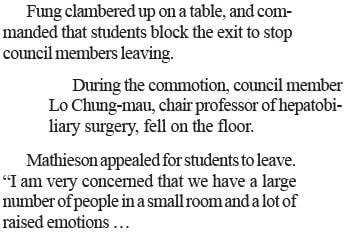 Most of us fondly recall university as an intellectually enriching while modestly debauched interlude that (perhaps) helped prepare us for real life. Yet for a few people, the campus is real life – a place they inhabit for decades and come to view as normality. Inevitably, they become institutionalized and warped. It is a world of doddering deans and raving rectors. Lecturers seethe about appointments that went to others. Department heads become obsessed with the lack of funding for Cultural Studies or work on 12-dimensional universes. Professors froth at the mouth over research grants that were denied. Feuds and resentments go on for years. Little wonder that right-thinking people back on Planet Earth have an instinctive aversion to anything to do with academia.

And so it is with extreme wariness that we consider the events last night at Hong Kong U, because on the face of it, it’s all about provosts and pro-vice chancellors and other tiresomeness.

The headline story is that, like noble counterparts down the centuries, students protested, specifically by storming the University Council. Someone climbed on a table. Someone else fell over. Council Chairman Leong Che-hung – last heard of back in the 1990s – ended up 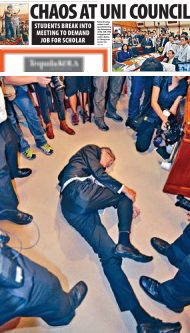 doing some sort of livestreamed late-night teach-in/debate with delightfully stroppy kids in T-shirts, while podgy middle-aged men in suits looked on, and cops hung around outside.

It looks like youthful idealism versus pompous and arrogant has-beens. On the surface, a semi-obscure academic is in line for appointment to a particular position in the university hierarchy, and the Council is delaying things because they want to fill another position first, though no-one seems to know why. The students protest because… students do.

But of course it’s more than that. The Chinese Communist Party is still sorely freaking out about the Occupy/civil disobedience concept that emerged from HKU nearly a couple of years back. The academic up for promotion, Johannes Chan, is a buddy of the pro-democracy theorist and fellow Professor Benny Tai. While we’re all supposed to be ‘moving on’ and ‘focusing on the economy’, China’s locally based officials cannot let go, and the intimidation, smearing and vindictiveness against the Occupy movement must continue. Beijing and local officials have essentially told government-appointed members of the Council to delay Chan’s appointment.

This political interference in yawn-inducing academic affairs is just one incident of United Front manipulation and bullying. It is not just an act of revenge against participants in Occupy (which would simply be childish), but part of an attempt to instill a climate of fear and obedience. It has already affected Hong Kong institutions from the media to the police complaints system. Next, it could be subverting the courts. This goes beyond students or HKU alumni, or even Hong Kong’s broader pro-democracy camp.

In this case, pro-government stooges have to publicly comply with the Liaison Office’s instructions. For those who are academics themselves, maybe there are research grants and appointments for themselves at stake – best collapse and leave in an ambulance. Some, like Arthur Li, seem to relish annoying students and opposition. Leong Che-hung, staying and letting students heckle him, may be struggling. So this is not about ivory towers but the real world.

For context, let’s put ourselves in the Communist Party’s shoes. To Beijing’s officials, the Occupy civil-disobedience idea was not some cuddly, non-violent, Martin Luther King-inspired, idealistic and perhaps silly bit of grandstanding. Benny Tai’s methodology of focus groups, planning, and outreach sessions leading to ‘disobedience’ looked like an organized challenge to authority, thus the government – and scalable and movable and potentially replicable across the border in the Mainland. For the one-party state too, this is a fight for core values and survival.