We interrupt this China Dream for a few moments…

…while Xi Jinping sorts out some minor contradictions exacerbated by threats from hostile foreign forces.

The world remains bemused by Beijing’s measures to postpone a post-bubble crash in stock valuations by suspending trading and setting regulators and cops on sellers. The idea is to rescue the market by abolishing it – and presumably pray that something else comes along soon to keep the index looking superficially stable. One explanation for this is an almost-infantile refusal to come to terms with reality and stubborn insistence that fiction is truth. Another is blind panic reflecting one-party paranoia and insecurity. But a third is well-founded panic: China’s leaders know something we don’t about how bad their economy is.

An optimist would hope that maybe it’s just a wishy-washy averaged-out combination of all three.

As if a stock-market freak-out isn’t enough, Beijing also launches an extensive roundup of lawyers and activists. China’s authorities have long harassed people who help citizens defend their rights against official abuses, but this seems to be on a new level – the clampdown being nationwide and the targets being accused of running a ‘criminal syndicate’. It looks like their high-profile tactics to expose injustice have been too successful. Again, one explanation is that this is just a childish, tantrum-prone Communist Party’s insistence on sweeping dirt under the carpet and pretending it’s not there. Or maybe, in time-honored totalitarian fashion, they are over-sensitive and petrified of every little thing that moves. And the third explanation is that, unknown to the rest of us, they have genuinely good reason this time to be fearful.

Scary warnings that our financial sector is pitiful and bound to be crushed by Shanghai suddenly look more laughable than ever. (In a sign of disharmony among the local

And, just as suspicions grow that the emperor is wearing no clothes, Chief Executive CY Leung feels a need to kowtow to him, and seek approval for new policies. The policies concern longstanding ‘economic and livelihood’ problems that have suddenly become very very important after the recent political reform package flopped. Some could need cross-border cooperation and thus Beijing’s blessing; this raises the possibility of action against the unmanageable flood of Mainland visitors, but don’t hold your breath. (Deep thanks, however, to Korean officials for the recent decision to advise their selfie-stick hordes not to burden Hong Kong with their presence. It’s good to know someone’s on our side.)

Among all this excitement, the Hong Kong Journalists Association releases its annual report on press freedom in the city. For years, campaigners have tended to protest over-loudly at every perceived instance of self-censorship and other threats, while the free flow of information continued largely unhindered. But the Occupy-Umbrella movement and other recent events indicate that they are not exaggerating this time, and things are going beyond clumsy interference by crotchety old pro-Beijing media owners.

The report covers not only lame government manipulation of the news, but physical assaults on reporters by police and thugs on a scale unprecedented in Hong Kong, and looking systematic (like so much weirdness, from paid counter-protestors to contrived political statements from business groups, that happens to have the fingerprints of Beijing’s Liaison Office all over it). The report is 28 pages, and here’s a partial look at the contents… 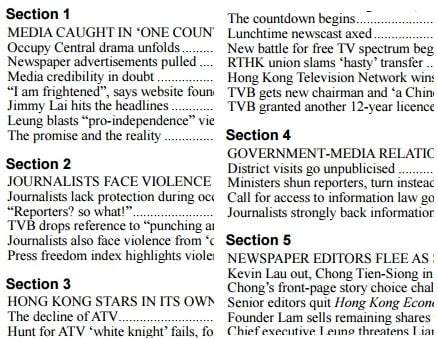 The Standard gives it a couple of columns. The South China Morning Post passes the HKJA’s self-censorship test in style by presenting one oblique paragraph that omits any mention of the report…