City upset at lack of devastation

Hong Kong freaks out over the fact that no storm followed yesterday’s Number 8 typhoon signal. I don’t have the statistics at hand, but I would guess around one in three Number 8 signals heralds nothing worse than blustery showers. Has everyone forgotten this, or are we just looking for something to whine about?

The afternoon timing of the Number 8 – just when people are day-dreaming about going home from work – was optimum for some serious transport congestion. But again, experience tells us it doesn’t have to be this way. Most non-village/-island residents can afford to wait a while rather than instantly all swamp the buses and trains. (Back in the old days, I remember that my company had a chivalric if unofficial ‘women and children first’ typhoon code: staff with dependents to look after would head back home, while the single males among us would bravely and nobly sacrifice the opportunity and seek refuge from the storm in Lan Kwai Fong, for however long it took to avoid being a burden on the transport system.)

Then there’s the clearing-supermarket-shelves thing. Not sure how you squeeze that into the standing-for-hours-at-bus-stop, must-get-home-now emergency routine – maybe people send the maid or an in-law. Millions of families must be feeling a bit foolish this morning, looking at the three-month stockpile of spongy bread rolls, canned tuna and instant noodles they plundered yesterday. Since even the most deadly 1960s-era typhoon etched into communal memory will shut the city down for more than 24 hours, panic-buying food after the Number 8 goes up is illogical. But again, it doesn’t always happen. Sometimes, 7 million people just calmly go home and hope for a day off; other times, 7 million people stampede into Park N Shop and grab everything in sight.

That’s partly Hong Kong’s herd instinct at work – the same kiasu-related impulse that has thousands of people clamouring for Snoopy dolls from McDonald’s without pausing to consider why.  But, I suspect, it is also connected with how frazzled the community has been in the days immediately leading up to the hoisting of the Number 8 signal. This has been a week of fear and doom, with the Mainland and local stock markets plunging and Beijing’s mandate of heaven looking just a tad iffy. At times like this, Hong Kong needs to panic over something to get the anxiety out of its system. We’ll be better next week.

I declare the weekend open with commiserations (or just pity) for the breathless, leering pink-lacy-lingerie-fetishists at the Standard, whose pervy photo of a young lady’s skirt flying up reveals panties of a gruesome and anticlimactic, convent-issue gray… 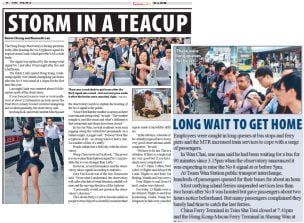 5 Responses to City upset at lack of devastation