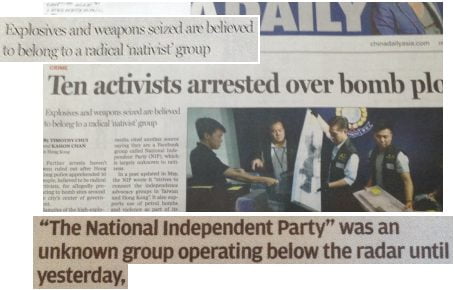 Young Hong Kong radicals have the balls to make bombs. Except of course they don’t, which is why the alleged ‘plot to cause mayhem and bloodshed’ uncovered by police in Sai Kung looks absurd, to the point of stretching credibility.

The least-bad scenario is that a few misfit-fantasists set up a Facebook page in the name of a ‘National Independence Party’, possessed air-guns, maps and localist/Occupy/protest materials, and attracted the authorities’ attention by discussing or researching explosives. So far, all legal. If they were demented enough to acquire particular ingredients in order to make explosives, the police obviously had every reason to move in. The timing and current mood – cops and government acting like a revolution is about to take place when the political reform proposals go before the Legislative Council tomorrow – are just coincidence.

The really awful scenario doesn’t bear thinking about, because it’s 10 times as idiotic and – surely – unthinkable. No respectable observer dares mention it for fear of sounding gauche, alarmist, paranoid or worse. But anyway, it’s this: the Liaison Office or other Chinese government agents assembled the cast of villains and their paraphernalia in what trendy commentators call a false flag operation, in order to portray localist radicals as terrorists and justify a clampdown on dissidents, passing of Article 23 national security laws, torture chambers, etc, etc.

Of course, the Communists wouldn’t be so desperate and stupid, would they? Therefore, we are left with the first explanation: the misfit-fantasists with their ‘unknown until yesterday’ movement and laughably contrived-looking plot.

They would have greasy hair and acne, and be loners (most of the 10 or so suspects the police have rounded up being innocent bystanders). They would have accumulated serious stocks of Occupy-type stickers and Guy Fawkes masks because they think the imagery is cool. (And they would be oblivious about the fact that Guy Fawkes’s gunpowder-plot target was… a legislative building. As would, now I think of it, Chinese government agents provocateurs.) They would have maps of Admiralty showing ‘certain places’ because they’re too dim to find, say, the vast and ugly Government HQ otherwise. They would have computers because terrorists always do. And the Hong Kong Police displaying the captured weaponry yesterday really are too stupid, as they claimed at the press conference, to distinguish a BB gun from a real assault rifle (clue: is it made of PVC and light enough for a child to pick up?)

We can sympathize with the South China Morning Post’s editorial, which coyly ventures to suggest that bombs are ‘simply unacceptable’ – on a par perhaps with such antisocial behaviour as eating on the MTR. Assuming a case exists, it will be interesting to see how much the police and authorities try to and/or succeed in depicting the suspects as actual representatives or associates of the sprawling range of pro-dem/Umbrella/nativist youth sub-cultures. Somebody somewhere has an opportunity, maybe a need, to smear the activist, radical, and whole opposition community. Handled over-eagerly, clumsily or otherwise ‘wrongly’, this case will do the opposite and just accentuate how peaceful and intelligent that nice Joshua Wong is, and how nativists and localists, in their youthful and noisy way, are reasonable and have a point.