Clash of the universes 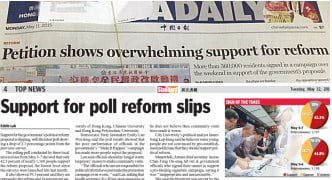 China Daily reports strong backing for Hong Kong’s quasi-democracy reform proposals from the petition-signing populace and the business world. But the latest (10-day-old) opinion polls say otherwise, with support dropping from 44.8% to 42.5%. Getting obsessed with each week’s statistically insignificant blip in the numbers is of course silly – except you can be sure everyone is taking it extremely seriously.

In the Standard’s report, pro-democracy politician Emily Lau attributes the apparent trend to the government’s embarrassingly lame promotional campaign, with such gimmicks as waving from a balloon-clad open-top bus. Few would dispute that these stunts failed and backfired – except that government loyalists have no choice. Thus pro-Beijing lawmaker Ip Kwok-him blandly maintains that officials’ community visits did not make things worse.

What we are seeing is a clash not just between ideologies, but between two different universes. The pan-dems perhaps form the rational and passive ‘reality-based community’ fighting the Chinese Communist Party’s faith-based and menacing system of fake truths. When you are asked to choose between these two, the ultimately unsolvable pros and cons of the political reform package itself are completely irrelevant. Fiercer public rejection of Beijing’s vision for Hong Kong would translate into further declines in support for the reforms.

Not looking good for the proposals!

One way or another, there will be some sort of Chief Executive quasi-election exercise in 2017. CY Leung will be eligible for a second term. Another name that crops up is former Financial Secretary Antony Leung, apparently backed by the Our Hong Kong think-tank founded by ex-CE Tung Chee-hwa (which is attracting hefty donations from tycoons, presumably shoe-shining and hedging their bets). And there’s former Security Secretary Regina Ip, who – a tad vulgarly, you might think – has founded a think-tank to support herself. With a dreary mix of predictable business and Beijing-linked associates, it is undertaking a study of Hong Kong’s ‘competitiveness’ that will end in September 2016, which is around the time wannabes will be declaring themselves up for nomination.

So far, so depressing. (If the choice is to be among the above three, you almost hope it’ll be CY, because the other two would just drag things out for ages, while with him we can probably go straight to the popular uprising, and then have the PLA tanks roll in and get this whole thing over with.)

First is Peter Woo, scion-in-law of the Wharf real-estate empire. Those of us with long

memories will recall that he played the role of make-believe rival candidate in the 1996 ‘selection’ of Tung. For a decade or so after, he occasionally popped up with awkward ‘statesman-like’ speeches and op-ed pieces, which hinted at a mindset both clueless and reactionary. Then he seemed to realize that this was some mid-life-crisis fantasy, and the CE job wasn’t going to happen.

That must remain the case – 68-year-old Woo is a prime target for the tycoon-owned Standard’s pathological shoe-shining after some recent basketball-playing and a Tatler appearance. The problem is that some people who inherit a money-printing machine and seat on the city’s property cartel imagine that they have genius and insight, when a chimpanzee could have made the billions just as easily. If necessary, someone will no doubt tap him on the shoulder and break the news to him.

Second is Financial Secretary John Tsang, the classic Hong Kong bureaucrat who gets his budget forecasts massively wrong year after year, and regurgitates the same idiotic ad-hoc handouts, oblivious to any notion of reform or vision or beliefs. A hapless buffoon, many might think, and yet compared with the above alternatives, enough to make you fall to your knees and weep with gratitude. Among the many, many ideas he seems to lack are such concepts as censorship, intimidation, politically directed courts and gulags (he doesn’t even seem to get gut-wrenchingly sickening and deluded self-promotion).

John Tsang – glimmer of hope. It’s getting to this.

10 Responses to Clash of the universes