The Hong Kong-Macau-Zhuhai Bridge, which is now set to cost Hong Kong taxpayers a mere HK$87 billion, will be delayed for a further year or so. The problem is to do with laying tubes under the seabed (thanks to amazing breakthroughs by scientists in Guangdong Province, this will be the world’s first underwater bridge). Apparently, everyone assumed the bottom of the Pearl River estuary had been scraped clean, and indeed shiny, by decades of trawling. It now seems that through some freakish accident of submarine geology, the seabed has sand on it, and this means the project will take more time and – I swoon with shock on learning this – money. For reasons that non-engineers are of course too stupid to understand.

The good news is that no-one from Hong Kong has any particular need or desire to go to Zhuhai anyway; the place is just a smaller, shoddier Shenzhen – though in fairness it has some OK seafood places. The South China Morning Post says the new link will cut travel time from 3 hours to 30 minutes. They are assuming the only existing connection is by road (via the Humen Bridge). In fact, on a door-to-door basis, the trip by the new bridge will be little or no faster than on the existing ferry services. This also goes for Macau, which is too small to accommodate extra traffic, and so will be insulated from the bridge by a sort of truck-stop buffer zone. As, now I think of it, will Hong Kong be for Mainland-registered cars (unless our transport geniuses decide Central can handle thousands more vehicles). So no need to panic about the delay: the bridge is destined to be largely unused, unless they

move the Standard Chartered Marathon onto it.

If this were the only white-elephant snag, we might overlook it. But we have a second that’s quite similar: the high-speed rail link to a suburb of Guangzhou we can never remember the name of. Setting us all back HK$71.5 billion and rising, this mega-project is also running into unforeseen difficulties. Apparently, when contractors dug down under the ground beneath Kowloon and the New Territories, they found an extensive mass of strange grey material with little black specks. To the naked eye, it looks rather like the flesh of dragon fruit. However, to the engineers’ horror, the substance turned out to be extremely hard and therefore very difficult to dig through. Scientific analysis showed the mysterious material was a stuff called ‘rock’. Experts at the MTR are striving to overcome this astonishing and unexpected challenge as we speak.

Again, the good news is that no-one wants or needs the high-speed rail anyway. Apart from a dozen passengers per week who want to visit [insert name of that GZ suburb], the target market is people who prefer to take 10 hours to get to Beijing/Shanghai by rail rather than take a three-hour flight. In other words, only a dozen other idiots. Plus another 36.2 million Mainland shoppers. So relax: no-one will miss it.

Back in the mid-1990s, Hong Kong’s last governor, Chris Patten, decided that a bit of Airport Express-linked reclamation off South West Kowloon would make an ideal and badly needed park for all humble citizens to enjoy. After the 1997 handover, the new regime thought this wasteful, as only a few ice-cream concessions would make any money. Instead, the area would be a ‘tourism’ attraction, possibly with a stadium. Then someone pointed that this was also a waste, as people could make even more money if the area was zoned for luxury housing – with developers having to run an arts-hub museum on the side to make it look like something for the public good. After the public saw through this scam, officials had a big tantrum and decided that, if the community wanted to waste money, they would waste tons and tons and tons of it, so there.

The result was the West Kowloon Cultural Arts Concept Themed Mega-Hub Zone District Project as we know it – a visionary plan for a huge rectangular concrete centerpiece building, alongside a huge square concrete building, across from a huge lantern-shaped concrete building, next to a long row of medium-sized oblong concrete buildings, all linked by flat concrete with plastic palm trees and dedicated to displaying pretty pictures and hosting much-treasured and wildly popular traditional Xiqu events. Most exciting of all: the mega-zone hub complex would have a giant underground parking area that, after much effort, bureaucrats calculated could become the Solar System’s most expensive ever basement, with an ever-rising price tag leaping from HK$13 billion to HK$23 billion just for starters.

Unlike the Zhuhai Bridge and High-Speed Rail, which were whims of ‘integration’ and ‘cooperation’ with the motherland, the Cultural Mega-Arts Zone Hub Concept had to have an avowed purpose – hence the aforementioned pretty pictures and music. So they needed an exotic foreigner whose official job would be to sort out paintings and singers and things, because they know all about that. But the problem is, they keep leaving (and we’re paying them big bucks). Hong Kong eagerly awaits the next thrilling episode of this saga.

As a light relief from large-scale infrastructure trauma, along comes Civil Aviation boss Norman Lo. When no-one was looking, he added extra features to his department’s new headquarters. I’m not sure how exactly a civil servant can change architectural plans and interior layout and designs without telling (let alone asking) anyone, but apparently you can. Or at least, up to a point. Then – bless them – our much-maligned Legislative Council members find out and lay into the guy.

Yes, you’re in the wrong business… 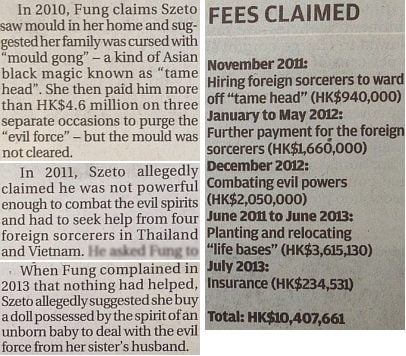