It has been a very military sort of week, with Hong Kong Army Cadets appearing out of nowhere in a contrived and faintly ridiculous display of pro-Communist patriotism among the city’s youth. The observant and curious have noticed that the militia’s senior officers, from the ravishing Commander in Chief Regina ‘Mrs CY’ Tong to the embarrassed-looking Admiral Bunny to the tragic Honorary Brigadier General Eddie ‘Bokassa’ Ng, all wear medals. Here’s a tentative explanation for some of them.

uniforms. If so, not everyone grows out of it. A kind soul sends me one of the strangest links I’ve seen for a while: behold the Field and Mountain Division. Apparently a sort of fantasy alter-ego of the ‘Friends of Mount Davies’, they have an Acting Lt Colonel and a Pioneer Engineering Section, and even official promotion announcements. All good clean healthy fun, or disturbing? We won’t go into their medals.

If it’s all too much, you could always leave the Manhattan of Asia and try the American one. But first, check out the 15 Things not to do in New York City. It seems the Big Apple and Big Lychee have many pitfalls in common. For example, Number 4: Don’t go on a fancy harbour cruise tour, just ride the commuter ferries. Number 10: Don’t stop abruptly in the middle of the sidewalk (so good to know we are not alone in suffering from this pestilence). Number 11: Don’t eat at chain restaurants, when you’re surrounded by amazing local food. The similarities even get kind of eerie. Number 14: Don’t go to Soho. That’s exactly what I tell a thousand Koreans every day on the Mid-Levels Escalator.

As we all know, the crush of tourists/shoppers into Hong Kong has zombified the city’s retail sector, with international luxury tat brands aimed at outsiders driving out smaller operators serving neighbourhoods. Cinemas and bookstores are well-known casualties of this oppressive, landlord-oriented tourism policy. The government has recently talked about subsidizing cinemas to support the local film industry – an idea so demented that, like Eddie Ng in uniform, it is probably a joke.

Distribution of media via the Internet is also playing a role here. You can have an e-book in your possession less than 30 seconds after first

hearing about the work. Which brings me rather elegantly to my latest Amazon/Kindle/blah-blah download: The Ballad of a Small Player by Lawrence Osborne.

For a synopsis, reviews are here, here, or here.

There is something special about fiction set in a place or milieu that you and the author both know well. Muhammad Cohen’s handover allegory Hong Kong on Air is a good example; such a story can be enjoyable regardless of other literary merits. But it doesn’t work if the author is ignorant of the locale; Paul Theroux’s handover allegory Kowloon Tong was rubbish.

Ballad of a Small Player takes place mostly in Macau, partly on Lamma (in an amusing use of artistic license, the two places are linked by ferry). The author gets the atmosphere and most of the details gloriously right. As some reviews point out, in this respect he is paying homage to Graham Greene; the main character ‘Lord Doyle’ is the son of a vacuum cleaner salesman (Our Man in Havana) and, like several of Greene’s semi-heroes, is a drunken Englishman rotting in the tropics. The plot doesn’t, shall we say, get in the way. All is sordid and louche and base, but also dream-like – it is not totally clear that the girl who plays a key role in Doyle’s escapades actually exists, at least in earthly form.

Since your local cinema has been replaced by a Mandarin-speaking Louis Vuitton golfing accessories emporium, I declare the weekend open with an obscure film gem from YouTube. Background: in the 60s, Australia’s young talent usually fled their backward homeland for London. One example was writer and actor Barry Humphries. He wrote a comic strip for Private Eye on a young and clueless Aussie turning up in the Mother Country – the perfect vehicle for merciless satire of both the loud brashness of his émigré compatriots, and the uptight obnoxiousness of the Brits. That was Barry McKenzie… 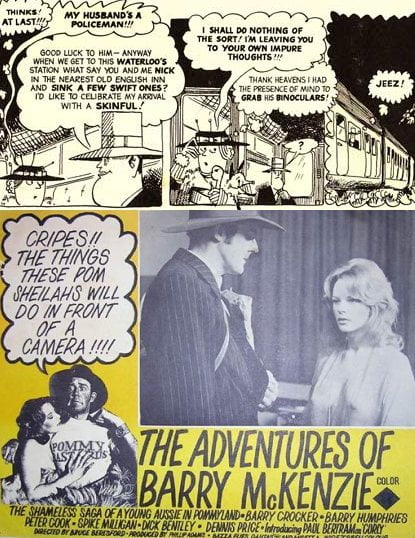 As well as banning the books of the comic strip, the Australian authorities saw fit to subsidize a movie version. It is, we can safely say, a classic of the early 70s Aussie-Brit politically incorrect comedy-satire genre…