A last, longing look at the SCMP (for a few days)

I spend extra time looking through the South China Morning Post today, as it’s my last chance to see the paper up close until next week after I return from a trip to exotic foreign parts. 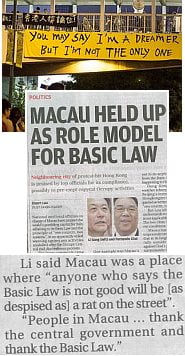 The front-page news is that Macau is wonderful because anyone there who says the Basic Law is not good is considered to be no better than a rat on the street. So says Li Gang, Beijing’s former top man in Hong Kong. The implication, of course, is that the Big Lychee is full of sewer-dwelling vermin who refuse to accept that their city’s constitution allows only quasi-universal suffrage.

The Basic Law does require a committee to nominate Chief Executive candidates, and the wording does not rule out a screening function; the drafters wrote it that way back in the 1980s for a reason. Pro-democracy protestors seem to half-acknowledge this in their use of wistful John Lennon lyrics. If Li Gang were more diplomatic, he could have said that Macau is wonderful because the people there are not dreamers.

Why does the SCMP give this trivial if melodramatic bit of totalitarian mouth-frothing such prominence? There was a spectacularly lurid murder of the compensated-dating/teenage-girl/body-in-dumpster variety. And there’s the intriguing story everyone’s missing: was abused Indonesian maid Erwiana Sulistyaningsih’s employer Law Wan-tung trained by the CIA? Apart from water-boarding, she seems to have followed the Agency’s torture methods pretty closely (allegedly). Presumably, the editorial rule is that grim Communist tyrants’ horribly unsubtle, counterproductive, veiled threats to naughty, disobedient Hong Kong have to be highlighted as a public service.

Elsewhere in the paper, three columns examine where Hong Kong goes from here – or will go as soon as we get through the seemingly interminable and rather too self-absorbed tents-in-Admiralty stage and continue with the actual goals of decent governance and political reform. Writer Philip Yeung skewers ex-Chief Executive Donald Tsang for his role in ramping up property prices and condemning the youth to despair. This is arguably overdoing one particular cause of our ills, but who can resist seeing Sir Bow-Tie getting a polemical stomping? Economist Richard Wong puts our strife in a global perspective, downplays purely local economic and generational aspects and concludes that the political structure is the problem, at which point his word-count is up. But the real treasure is yet to come.

Legislator Jeffrey Lam rehashes standard establishment belittlement of the publicly loathed and illegal scourge of civilization and the economy that is tents-in-Admiralty. Using the phrase ‘think out of the box’, he then proposes government-developer mini-apartments for the young, a fund to train youths to be entrepreneurs, and a re-think about whether kids really need college when apprenticeships would prepare them better for careers in key industries like, um, logistics.

It is understandable that young people are concerned about missing out on opportunities, and about the cost of living and lack of upward mobility. However, they are in a better position than the previous generation like us, most of whom were pioneers who came from Guangdong to Hong Kong with almost nothing. The business environment was rough.

‘Like us’? This guy is a multi-millionaire who essentially inherited a plastic-toys empire (if you ever had a Barbie or a GI Joe, it probably came from his dad’s factory). He and several others left the Liberal Party to form Economic Synergy because they felt the city’s textile/property-tycoon caste would get more goodies if they shoe-shined the government more, rather than engage in non-stop petulant schoolgirl whining like James Tien. (You can always tell the ‘elite’, out-of-touch, multiple-properties clueless from their driving issues.)

I would like to think that people like Jeffrey Lam are as thin on the ground in Taiwan – where I’m going – as copies of the SCMP. We shall see. If I find any, it might be on the Twitter thing, wi-fi in Asia’s Pineapple Cake hub allowing.

19 Responses to A last, longing look at the SCMP (for a few days)