Fresh from accusing un-nameable foreign forces of masterminding unrest, Hong Kong Chief Executive CY Leung declares that open elections based purely on numbers of votes are unacceptable because the poor will gain more political power. Brought up to assume this issue had been sorted out around 1789, the overseas media he was briefing were suitably intrigued. More here, here, and elsewhere.

He was justifying the Basic Law’s concept of voting via rigged ‘broadly representative’ bodies (as opposed to directly by individuals). This is how we get corporatist-style quasi-electorates of interest groups like Functional Constituencies, the CE Election Committee and the proposed Nominating Committee. In the New York Times 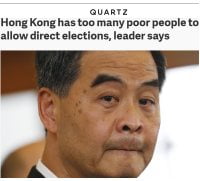 piece he cited his need to pander to the sports lobby (taxpayer-funded parasite cyclists) as an example of the superiority of this system.

As with the ‘foreign influences’ thing, CY is simply parroting the Chinese Communist Party’s official line on the need to protect Hong Kong’s ‘capitalist’ class of cartel-owning landlords. It is stunning and grotesque to see a Marxist sovereign power declare that its mission is to shield a small, mainly hereditary, landed oligarchy of hyper-wealthy from the poor (not to mention a large chunk of the in-between middle class). How do we get our heads around this?

We can attribute Beijing’s 1980s-90s co-option of Hong Kong tycoons to simple United Front-building. There are two possible – and overlapping – reasons why this unholy relationship has subsequently grown stronger.

One is that the post-Deng Xiaoping Communist Party has metamorphosed into a crony-capitalist kleptocracy, a la mid-20th Century Latin America. Asset-stripping, land-grabs, nepotism, pocketing of infrastructure funds, Bo Xilai-style confiscations and all the other horrors have turned the one-party state into a pyramid of corruption into which Hong Kong’s developer-dynasties have been absorbed. In other words, it’s all about money.

against the spread of the democratization disease into the Mainland. By ensuring that the tycoons and cronies fear and oppose universal suffrage here, the Communist Party can feel that bit more secure up in Zhongnanhai. Seen this way, it’s all about power.

To the extent that it’s more about power than money, Beijing would be prepared to drop the tycoons if their unpopularity in Hong Kong became more trouble than it was worth. It would be great if the students meeting government officials later today grilled CY’s top officials on this subject. ‘Do you believe people earning HK$14,000 a month [CY’s benchmark] are a danger to governance if given the vote?’ There’s a dozen questions about the tycoons’ economic dominance that students could utterly skewer the officials with. (They could also ask if the officials believe foreign forces are manipulating the pro-democracy movement, and if so, to name them.)

Sadly, we can be pretty sure they will let the government off the hook and zero in on the mind-numbing subject of nomination systems.

Meanwhile, an excellent opportunity to dig this out – by an unknown genius amateur cartoonist…