We take it for granted that Hong Kong’s pan-democrat and pro-Beijing camps will disagree on almost everything. We also expect different pro-democracy factions to bicker openly much of the time. The Standard’s ‘Mary Ma’ editorial admires the way diverse elements of the patriotic-establishment spectrum ‘unite at Beijing’s command’ while the opposition lacks a ‘central authority to rally behind’. In other words: things are so much easier with totalitarianism and the punishment of individuals who express their own ideas rather than the official line.

Anyway, a few gaps are showing in United Front City. Legislative Council President and elder statesman of the quasi-Communist DAB Tsang Yok-sing is taking issue again with Mainland Basic Law expert Rao Geping. The hitherto little-known Rao’s statement that there could be no open nomination of candidates for Chief Executive in 2017 was final, Chief Secretary Carrie Lam said last month. Although she back-tracked on this, we were left with the impression that this Rao character was some sort of big deal. But – as if giddy with his new-found fame in glamorous Hong Kong – he then starts shooting his mouth off about how Beijing should impose its own national security laws here to bridge what looks like being an interminable gap before we get around to introducing our own as required by Article 23 of the Basic Law. Tsang openly dismisses the idea as unconstitutional. Both individuals are de facto members of the Communist Party apparatus, and yet one must be wrong. (Only the ‘de facto’ bit prevents this situation from breaking the laws of Leninist nature.)

The general assumption is that Rao is essentially threatening Hong Kong. Or, more accurately, thinks he is. The truth is that a national security law is mostly a danger to the pro-Beijing camp. They paid dearly for backing the last (badly managed) attempt to pass such legislation in 2002-03, when an angry citizenry overthrew the Chief Executive for his trouble. They’re not going down that path again in a hurry. The pro-dems would rub their hands with glee at the prospect. Whoever Rao represents doesn’t understand the Big Lychee, and Tsang is more than happy to say so. 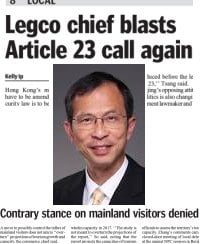 mildly guided one (a pleasant surprise) will do the job. He is also doing himself a favour. He would make a brilliant Reluctant Leader, forced by popular demand to abandon his customary modesty and shoulder the responsibilities of power. (“Who, me? Aw, gee shucks” – the guy is straight out of central casting.) Alternatively, a more conventional corporate/bureaucrat/sleazebag CE candidate would benefit greatly from his endorsement.

While visible divisions within the Communist Party universe may be unusual, few will be surprised to hear that one part of the Hong Kong government doesn’t know what another is doing. The story so far… Commerce and Economic Development Secretary Greg So says that having 50 million Mainland shoppers a year is terrific tickety-boo fun, and let’s move onto 70 million and then 100 million as soon as possible. With even the mildest, nicest, kindest Hongkongers starting to think that mass-lynching of tourists is the only solution, Beijing officials start to mutter about studying the city’s tourism capacity, and Chief Executive CY Leung keeps in step by openly pondering some sort of limits to visitor numbers.

What happens next? Obviously, Greg So goes back to blathering away about how we’re still on schedule for 25 billion tourists a month starting next November. We have to make residents’ lives as unbearably horrible as possible because it’s good for economic development.

What’s going on here? Are he and his officials seething at the loss of face at being contradicted, and angrily insisting that they are still right, in an infantile attempt to make themselves feel better? Is So on the take, perhaps accepting trips to Macau in private jets and a luxury apartment in sunny Shenzhen in return for making property tycoons richer at everyone else’s expense – as our last CE might have,in theory? Or is Greg a total and utter cretin? One of those great mysteries. Meanwhile, we can but look on as he demands that you definitely can get a quart into a pint pot, and his superiors tentatively suggest that it might not be possible, or at least not entirely.