Your tax dollars at work, again

At the southern end of the old Kai Tak runway is a huge tube, like a worm from Dune about to burrow away under the planet. Except, unfortunately, it’s not going to burrow anywhere. It’s already done that: it burrowed into your wallet and helped itself to eight billion of your hard-earned dollars. That’s just the construction costs; the value of the land it occupies – yes, the same stuff of which we have a critical shortage – would be a multiple of that. 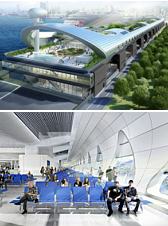 It’s the Kai Tak Cruise Terminal. As with Disneyland, the Bridge to Zhuhai, the Tunnel to Shenzhen and dozens of lesser projects, this is basically a handout to tycoons’ and others’ construction interests cunningly disguised as a white elephant for the tourism industry. Look at the website, and you see one of those buzzing, glitzy, dazzling, vibrant World-Class Exciting Iconic MICE Mega-Hub Facility Things that make loser cities like Singapore, Dubai, Shanghai and Doha look so distinctive and unique.

So I thought I’d go and check out the buzz and the glitz. Then a few seconds later, I came to my senses: what could be more repellant than a mile-long, dog-poo-shaped CLK-IFC hybrid full of what Cathay Pacific commercials used to call ‘the new world of international traveller’? But then I saw the schedule. The place handles one ship movement a week at its busiest, and none at all in some laid-back months. Mostly it’s the same half-dozen vessels, coming, staying 36 hours at the most, and going again. There would be no-one there. Just me, a sprawling mall, maybe a Starbucks and a Ben and Jerry’s and perhaps a Mr Bing. Loads of places to sit. Wi-Fi. And no crowds.

How to get there? The site gives a number of rather lame options: take a ferry to somewhere nowhere near the facility, then get a taxi; take a bus to somewhere nowhere near the place, then take a taxi; or take the MTR to Kowloon Bay and get green minibus number 86 from Telford Gardens direct to the terminal. Which is what I do. To add to the enigmatic, out-of-reach allure of the Giant Worm-Terminal, the green minibus is sufficiently hard to find that many intrepid investigators would give up and say: “What the heck – Telford Gardens is more fun anyway.” But eventually, I find myself crossing a bridge over the lower Kai Tak Nullah and, for the first time since 1998, I am trundling down Runway 13.

Along with a handful of fellow minibus passengers – including a few kids – I arrive in the cavernous bowels of a complex still clearly under construction. Don’t believe the stuff about how it ‘opened’ last June. The huge and otherwise empty dropping-off zone at the structure’s ground level is dusty and semi-finished, with little groups of workmen in the distance drilling and otherwise fixing expanses of concrete and glass. There is no obvious grand entrance, just big windows revealing desolate unlit spaces, dormant escalators and barrier tape. Some signage points to elevators to the rooftop park.

This is why Telford Gardens residents who are in-the-know come here: a place to bring the kiddies…

You can tell, instantly, that you are now in Leisure and Cultural Services Department-land. Lots of lovely concrete, and the pristine Foster + Partners design features have been hastily covered with laminated notices forbidding every possible activity. But it’s spacious, with plentiful seating (which you don’t have to wipe clean because no-one has ever sat there before) and generous quantities of plants, cared for by LCSD gardeners in Hakka hats who easily outnumber the visitors.

Clockwise from top left: the view from the south end of the runway; view of the harbor to the west; friendly LCSD reminders not to mutilate the vegetation, just in case you were going to; view of the runway to the north; that special Government Grass that tragically dies almost instantly…

But what about the interior, down below? What about the Cruise Terminal proper, where you can stroll through the arrivals halls, wander along past all the exciting retail outlets, grab a coffee, stretch out on a luxurious waiting-area chaise-longue and check your emails? I find an escalator that is operating and apparently not forbidden to unauthorized persons. It looks dark down there – the Telford Gardens crowd won’t go near – but I decide to take a look…

To paraphrase the old saying about Los Angeles: there’s no ‘in’ in there. You can wander around stairwells, corridors and elevator lobbies. And you can peer through tall, wide windows into large transport-terminal halls with rows of seating. Everything’s silent. Apart from a few zones that are lit for no obvious reason, it’s in darkness. It’s also devoid of life, with no travellers, no shops, no check-in staff – just an occasional cleaner. Indeed, the occasional cleaner is creepy: she stands motionless, waiting for a patch of floor or a handrail to catch a bit of dust, apparently not noticing as you tiptoe by. Something familiar about this, or ‘déjà vu’, as Jean Luc Godard would say: yes, it’s Alphaville.

A huge building, with nothing in it. Good place for a rave. I’m surprised wall-climbers, indoor cyclists or parkour freaks haven’t discovered the place. If this were Venezuela, the homeless would move in.

One thing you notice, even allowing for the fact that it’s a grey day, is a remarkable lack of colour about the place. The only splash of vibrancy I see is a poster advising arriving tourists that carrying offensive weapons is illegal in Hong Kong. We spend HK$8 billion on a building designed to attract people who need to be told this?

Passengers disembarking from the weekly-at-most cruise liner so far have apparently complained about poor transport links to the rest of Hong Kong. Back outside at street-level, there is a taxi rank with a sign indicating journey times to places like Ladies Market, but of course with no taxis. Why should there be? It would be possible to walk on a nicely manicured footpath along the runway back to Kowloon Bay, but you would go past a lot of construction as you get closer to the Mega-Box, as they’re building a children’s hospital (which will presumably be for tourist-children only). So the number 86 to Telford Gardens it is.

In sum: more billions of your dollars, down the toilet.