With all their free-trade hubs and other hyped-up regional projects, Chinese policymakers are experts at drawing lines on maps and declaring the areas within them special ‘zones’. Now they have done it with a big chunk of the East China Sea, naming a block of ocean including the Diaoyu/Senkaku Islands the East Sea Air Defence Identification Zone. The US State Department bluntly rejects the claim that Beijing can make demands of military aircraft flying through international airspace and not intending to enter Chinese national airspace.

Out of nothing, Beijing has created a new cause for alarm among Japanese, Americans and others, and thus a new reason for itself to freak out in response to criticism. The 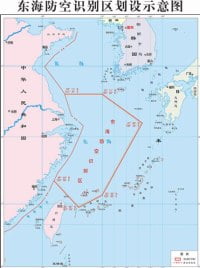 obvious question is: why? Why now? Why at all?

The ‘why at all?’ is fairly easy. Chinese governments like erecting symbols of territorial control. Beijing treats Indian visa applicants from Arunachal (“Southern Tibet”) differently. It incorporates local government bodies, complete with vast assembly house, for far-flung rocky outcrops in the South China Sea. It looks silly, but they’ve studied their Goebbels.

The ‘why now?’ is much harder. Many believe that Beijing has recently made a serious international-relations blunder. It found itself looking like the Indisputable New Asian Top Dog With Enfeebled Yankee Ex-Rival Slinking Away last month when Barak Obama failed to attend the APEC bore-fest in Indonesia. Then it threw that away through its infantile and vindictive non-response to the Typhoon Haiyan disaster in the Philippines, while the Mighty and Generous US (and Japan) poured in assistance.

Given its timing and its transparently contrived nature, the Air Defence Zone can only be a response to this blunder. Yet, from any rational point of view, it can itself be only another blunder – further worrying and alienating, and unifying, neighbours.

One explanation (as with the churlish reaction to the typhoon) is that this is simply angry-baby-throwing-toys-onto-floor diplomacy. Have a tantrum, feel better. But this doesn’t square with the caution and relative sophistication the leadership shows with delicate domestic policy areas – say reform of rural land ownership or the household registration system. The same, small body of people don’t lurch from sensible to nuts to sensible-again like that. (Do they?)

Another explanation (again as with the Haiyan meanness) is that this is designed for domestic consumption. This is a bit more reassuring, but not a lot. Have decades of the Chinese-victimhood/resurgent-pride narrative been so successful that China’s leaders have painted themselves into a corner, and are now forced to scare and anger the neighbours in order to satisfy their own population? Again, this doesn’t square with Beijing’s rigorous determination to manage public opinion on everything else.

So a third explanation is that different parts of the power structure are pulling in different directions. It could be, for example, that the Air Defence Zone was proposed by hawks as a heady follow-through to the APEC Top Dog performance, and pushed through in defiance of moderates. With Xi Jinping supposedly cleaning the military of top-level corruption, pick your nightmare scenario.

Chances are that this will just blow over – yet another mystery for analysts trying to gauge the ‘China threat’ to scratch their heads over; another reason to wonder how to gauge just how seriously they’re supposed to take Beijing.

This is the same government that will decide Hong Kong’s new election system. We now learn that the forthcoming public consultation will not cover different voting mechanisms, but invite us all to ponder how the Basic Law will affect and determine the eventual choices. To the inevitability that the process will lead to guided democracy, we can now add the inevitably that the process will be very, very tedious. One glimmer of novelty comes from pro-Beijing veteran and lawmaker Tsang Yok-sing, who presents a better-than-average version of the old story about how we are living in a world where the division between pro-dem and pro-Beijing camps no longer makes sense. For years, he eschewed all use of his English name ‘Jasper’, and only the most dull-witted and pedantic writers and editors insisted on it; now, he seems to be rejoicing in it. These things happen for a reason.

As a contribution to the consultation, my definition of a functional political structure: sports bores whine about how a new multi-billion dollar swimming pool doesn’t have the right sort of diving board, so the government says: “You’re right: we’re knocking the whole thing down and building a hospital instead.”