The Hong Kong government will today launch a public consultation exercise on population policy. We had such a debate a few years ago, under Chief Executive Donald Tsang. It was one of several lame attempts to convince everyone that we faced demographic and fiscal doom unless we spent more of our own money on things, and – should we fail to be convinced – the idea would be… put to one side. Which it was (not just ‘population policy’, but sales tax, and health care financing as well).

This time round, it looks a bit more serious. There is talk of specific policy initiatives, like financial assistance to parents and higher retirement ages. But the document will almost certainly reflect confusion in and beyond government about what it is we are trying to achieve. 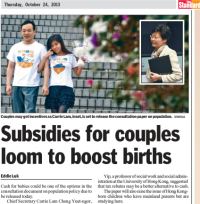 Do we want to do whatever it takes (more babies, more immigration, longer working lives) to maintain long-term growth in the size of the Big Lychee’s economy simply in absolute terms? If so, why? (Does the population exist to serve and support an economy – or should it be the other way round?)

Is the daily flow of poorly educated women into the city on one-way permits a good long-term thing because they will later have educated kids? Or do we need to compensate for the supposedly poor quality of our work force by attracting brainy U-grads and Nobel Prize winners? Why talk about attracting new people when we can’t house the ones already here? Why go on about quality when we divide existing kids into three bands of school, and then teach all three identical (and brain-numbing) curricula that the bulk of students can’t handle or benefit from?

Then there are things the consultation document will avoid mentioning out of taste or politeness. Is Hong Kong culturally/ethnically a Chinese city? Or is it a ‘world city’? (Note: you can tick one only.) A few years ago there was much excited chatter about Filipino domestic helpers getting right of abode and bringing their kids over. Pro-Beijing labour activists got especially panicky; these people speak better English than our members, the union leader said, and they’ll take our jobs. So: we don’t want brown-skinned people because they are too skilled and their kids will be a burden, but we want Mainlanders who aren’t skilled enough because their kids will be assets. Got it.

Bloomberg’s interesting item du jour takes us to Indonesian Restaurant 1968 to investigate how the difficulties of getting good staff are affecting the business, and perhaps even the service. It so happens I ate there a year or so back. Let’s say the establishment’s personnel problems could, now you mention it, be among the reasons I haven’t returned (there are three equal or better, if less fancily furnished, Malay places within a 200-yard radius of that Queens Road spot). There’s a shortage of people, but we actually have a youth unemployment problem and a 17.5% poverty rate for 15-24-year-olds.

One interesting approach to population policy would be, essentially, to stop worrying. Who says people are a problem in the first place? We don’t have enough of them? So long as we have a bloated public sector out-bidding the private sector for manpower, and loads of cleaners and security guards lounging around doing little, it’s hard to see a real labour shortage. And if some of us can’t save enough to support ourselves for the extra 10 years in retirement from 60 years of age to 90, then they’ll just have to start retirement at 70 instead. There is no problem. (Fewer kids running round, screaming? How sad.)

China Daily swallows the official line: an aging population hurts development. People are living longer nowadays because they are healthier; this hurts development and is a Bad Thing. Obvious solution: make people less healthy, so they die sooner; development stops getting hurt and we have a Good Thing again. Got it.