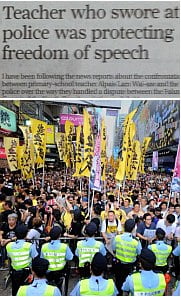 the right to speak back to the loopy quasi-Buddhist Falun Gong sect, whose socially disruptive exploitation of freedom of speech is on a par with the radical League of Social Democrats. If anyone was aggressive, it was the FLG. The police were totally impartial and had no choice but to act as they did to separate the pro-Communist HK Youth Care Association from the anti-Communist cult’s practitioners.

Alternatively, Lam is a heroine for standing up for liberty against an increasingly open and assertive Communist Party machine in Hong Kong manipulating the local police and fronts like the HKYCA and Parents’ Association. And she has pretty much the whole of Hong Kong behind her. The problem here is that this version comes from Epoch Times, which is part of… the Falun Gong. (The pro-Beijing conspiracy theory is that its lavish funding comes from the CIA – or your favourite anti-China force.)

We can say that the whole of Hong Kong with an opinion (30%? 50%? 90% of the total?) leans fairly strongly towards one of these two viewpoints. The clear majority are in the pro-Lam camp, concerned about police bias and free speech, while the anti-Lam brigade compensate with orchestrated noise about her bad language. The middle ground is sparsely occupied. The New York Times reports a third attitude: that it’s just a storm in a teacup. The fact that the drama is being covered in the NYT suggests that it isn’t. The fact that feelings are so high, and the split in the community is so glaring, suggests that this is serious. It might blow over, but not without leaving a yet bigger divide between the two sides. Every episode – National Education, the Occupy Central civil disobedience project, government officials’ alleged conflicts of interest, backlashes against Mainland shoppers, etc, etc – is like a sledgehammer striking a wedge in a big lump of wood.

It would be distressing enough to say that the Hong Kong government – as they say of our friend Tacitus’s contemporary, Nero – is fiddling while Rome burns, but they don’t have their act together to that extent. Executive Council convener Lam Woon-kwong does a well-intentioned touchy-feely thing with the Democratic Party, while some other genius on the same body (apparently) asks about stripping Alpais Lam of her Chief Executive’s Award for Teaching Excellence (and oh boy would that spice things up nicely).

In an ideal world, Chief Executive CY Leung would go over to Beijing’s local Liaison Office with two messages. First, call off the United Front and rogue patriotic groups’ screeching about Alpais, Occupy Central, National Education, the lot. You can switch it back on later if necessary, but right now it is provoking a feedback loop that is tearing society apart. Second, give full blessing and behind-the-scenes string-pulling support for at least one or two big, eye-catching distractions. An obvious one would be a swift official start to the political reform process, with a clear indication that loud and unelectable pro-democrats will be allowed on the ballot. Another would be a serious emergency re-housing programme for the 100,000 or so people in the worst illegal/unhealthy subdivided slum accommodation – cutting through all the building codes and zoning BS to get every family into somewhere decent if temporary in, say, two years. Something no-one can whine about. Instead, CY the increasingly wanabe wolf is, perhaps, waiting by the phone. It is all undoubtedly and intensely interesting. As China Daily might put it, the crux of the matter lies in the question: where does it end?

Curiosity got the better of me. In case you were wondering: it is a real name.