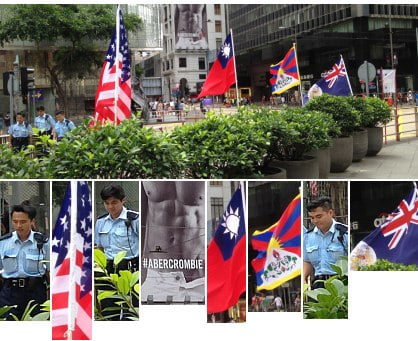 Yesterday’s 16th anniversary of Hong Kong’s handover was the now-familiar mixture of ritual, self-delusion, weird juxtapositions and bad weather. Acceptable recipients of the Grand Bauhinia Medal are now in such short supply that pro-Beijing ‘heavyweight’ (I won’t comment) Maria Tam gets one. Textiles heiress Marge Yang gets a GBS; rat-catching lawmaker Priscilla Leung gets an SBS, and Lau Wing-mai – a property guy who supported Henry Tang’s disastrous bid to become Chief Executive – gets the ultimate kick in the teeth in the form of a grimy tarnished old B (for Bronze) BS (emphasis on BS).

The Hong Kong Celebrations Association and other United Front and pro-government groups went all-out to divert attention from the annual July 1 pro-democracy march with more patriotic let’s-all-jump-up-and-down-and-be-happy events than usual. In fact, despite pro-Beijing figures’ scaremongering about a

dummy run for Occupy Central, the demonstration seemed to attract a barely average-size crowd. The cops so clumsily under-estimate the turnout that they lend credibility to the organizers’ obviously exaggerated count, but let’s say Chief Executive CY Leung isn’t going to have to pack his bags yet.

All is slogans. The establishment go through the usual stuff about one-country-two-systems and the motherland, but less convincingly than ever; the pro-dems fixate on universal suffrage and wolf-man Leung. Both sides want to avoid reality.

Bloomberg’s William Pesek writes: “Beijing has shackled Hong Kong with one bad, handpicked leader after another.” And – perhaps even more damagingly – with a political structure virtually designed to fail. Why? Is it deliberate and malicious, like the post-1949 economic punishment of Shanghai? Is it out of insecurity and fear of losing one-party control? Or are China’s leaders simply on the take, getting kickbacks from our local property cartel in exchange for keeping this rotten system? No-one’s even asking.

Hong Kong’s problems are not that difficult to solve. Step one: slap a 50% duty on all designer-label handbags, shoes, watches, cosmetics, etc, with a promise to phase it out as the Mainland reduces its own taxes on luxury imports. Within days, we will see less-crowded streets, more room on public transport and cleaner air. Big drops in commercial rents will follow as Abercrombie and Prada and LV and all those pestilential boutiques and perfumed candle stores close their doors. Hongkongers can have their city back, and with it economic diversity and opportunity. Only landlords lose.

What about our reputation as a shoppers’ paradise/free port? Screw it. Tourism is an ‘important’ part of our economy in the same way Japanese knotweed is an ‘important’ part of the ecosystems it invades and takes over. It’s a parasite. Then there’s Disneyland, similar in land area to the residential portion of Shatin – enough space to house half a million people. What housing shortage?

But no – the pro-Beijing crowd recite mind-boggling gibberish about social harmony and positive energy, while the pro-democrats demand an electoral system incompatible with one-party rule. There is hope… Back to Pesek: “Hong Kong is a fascinating proxy for how quickly and deeply Chinese GDP falls over the next one or two years.” When it comes to creating tensions and distortions, our economy beats our political divisions hands down. Is a slowdown in China really something for Hong Kong to fear? A third of property agents will lose their jobs over the coming year. Which means two-thirds, tragically, won’t – but it’s a start. A crash will cause suffering to all the right people. It will also help make the fascinating proxy’s 17th anniversary celebrations far more fun. 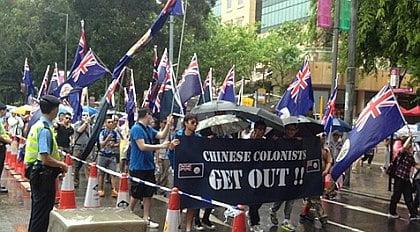 11 Responses to Another uneventful handover day