All must have prizes

With a sort of not-sure-why-I’m-here look in his eyes, Former Hong Kong Chief Secretary and unsuccessful Chief Executive candidate Henry Tang is ‘elected’ to the Standing Committee of the Chinese People’s Political Consultative Conference. Ex-CE of Macau Edmund Ho advises us not to view the appointment as a consolation prize after Henry failed to get the Big Lychee’s top post, even though it was handed to him on a plate. In other words, yes, it is a consolation prize. And a pretty worthless one too. In the old days, the Queen would give you a knighthood and you could call yourself ‘Sir’. (Some people, like Hopewell Holdings boss Gordon Wu, still pretty much insist on it. Is this a tycoon’s version of waving a colonial flag?) Ho adds that Henry got the job because ‘he knows many people from various sectors’ – in case anyone was wondering how they too could qualify for this esteemed body.

That list includes representatives of all the top four members of the Hong Kong property cartel save Sun Hung Kai, whose owner-bosses are sadly busy facing corruption charges. It might seem strange that the people who are in many ways responsible for the Big Lychee’s most serious social, political and economic problems are given such honours. In fairness, it is government policy rather than the lucky developers who are the cause of Hong Kong’s property pyramid scheme and its attendant evils. The reason is that, apart from Cheng, all the people on the list supported Henry in his tragic and doomed bid for CE last year, and Beijing needs to give them all this rather vacuous consolation prize. Cheng is there to make it look as if this is not the case.

Most pitiful name in the line-up is surely Peter Lee. The podgy heir to Henderson Land recently slammed young Hongkongers for the ‘outrageous’ act of waving the colonial flag (a pronouncement that had me rummaging around in my cupboards to dig out my trusty old lion-and-dragon banner). It is single, Buddhist Peter who famously sired triplets via a surrogate mother. His younger brother Martin is by all accounts relatively switched-on. The bizarre thing is that someone in Beijing seems to imagine that all of us here in Hong Kong will somehow respect this bunch for their senior CPPCC status. (The CPPCC as a whole seems far from exclusive; it looks like they’ll take anybody.)

Back home, the big boss at Radio Television Hong Kong, Director of Broadcasting Roy Tang, denies accusations of political interference in editorial decisions, calling them ‘regrettable’. We increasingly see this word used in such circumstances. Rather than dismiss others’ charges as ‘incorrect’, ‘wrong’, ‘erroneous’ or

plain ‘bullshit’, wounded innocent parties call them ‘regrettable’, which means something very different, and they do so in a sort of whiny, defensive tone. Most mysterious.

Another mystery is solved, however. Admittedly, the Standard and the South China Morning Post disagree about the number of dead pigs floating around in the river upstream from Shanghai. But who among us could seriously manage to work out whether it’s 2,800 or 3,300 of things all bloated, bobbing up and down and bumping into each other in the muddy waters? How did they get there? It suggests here that people are breeding too many pigs and, following a crackdown on trading in contaminated pork, there’s not enough land in the villages to bury the carcasses. So now we know. Simple, really.

And finally, courtesy of the SCMP, the Headline-You-Have-To-Read-Twice of The Day Award goes to… 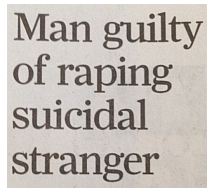 8 Responses to All must have prizes