One of the differences between Mainlanders and Hongkongers is that if someone mentions, say, ‘Guizhou’, a Mainlander will know that it’s a province in the southwest, the capital is Guiyang, the cuisine is distinctive spicy-sour, and the women are exceptionally beautiful and intelligent, while a Hongkonger will vaguely assume that it’s one of those cities near Shanghai or something. So it is with Yu Zhengsheng, well-known north of the border as Politburo member and Party Secretary of Shanghai, but hitherto pretty much unheard-of in the Big Lychee, where most people would be pushed to explain the difference between a Party Secretary and a Mayor.

This morning, everyone in Hong Kong has suddenly heard of Yu, and everyone knows what he does for a living: he drums up business for Shenzhen flag factories. Just as the colonial banner-waving fad seemed to have died down, the guy dredges it up again at a meeting with Hong Kong NPC/CPPCC delegates in Beijing. Voicing displeasure at ‘subversive’ protests and imaginary independence movements is a sure-fire way to encourage them.

Yu’s basic point was that anyone elected to power in Hong Kong under a system of universal suffrage would have to be a patriot. If this sounds familiar, it’s because we went through all this before. It was nine years ago, following Hong Kong’s mini-uprising on July 1 2003 and the subsequent backlash against pro-Beijing parties at that November’s district polls. A Politburo member and Vice-President called Zeng Qinghong suddenly cropped up in charge of a sort of witch-hunt against pro-democrats who were engaged in a foreign-led plot to seize power in the city.

A big, contrived debate took place about what it took to be a patriot, and who wasn’t one. Now-leader of the Democratic Party Emily Lau was out, for example, as she supposedly supported Taiwan independence. To be a patriot, you had to love China and love Hong Kong. Idealists complained that was just a euphemism for loving the Communist Party. But cynics knew it simply meant saying you loved the Communist Party. Kowtow. Shoe-shine. Publicly, and looking like you’re enjoying it. No-one, other than a few dreamers, has warm emotions about something so unlovable.

In early 2004, Beijing seemed to be genuinely panicking that popular demand for democracy would result in the regime losing Hong Kong. (It seems Beijing officials in the city had bureaucratic and political interests in convincing higher-ups that then-DP leader Martin Lee was bent on pulling off some sort of US-backed coup.) Since then, the Chinese leaders have wised up and pretty much promised a form of universal suffrage for 2017. Apart from the pro-dems, still stuck in their late ‘90s time-warp, everyone accepts that the system will be rigged; a one-party system is incompatible with a pluralist one. Instead, Hongkongers are now angry about housing, milk powder, overcrowding, property hegemony, shop closures, schools, the air and a few dozen other things.

Lately, the mood has been one of growing despair. The new CY Leung administration is bogged down in bureaucracy, petty details and pseudo-scandals; the Financial Secretary is clearly suffering from some sort of obsessive-compulsive budget-making disorder; malevolent tourism authorities apparently on a mission to suffocate and bury Hong Kong are dementedly seeking ways to increase the number of visitors. It seems there is nothing anyone can do to get the message across that this is all going wrong.

And then Yu Zhengsheng comes along with the answer. 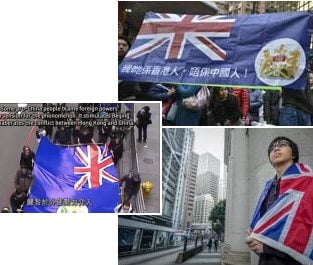 Click to hear ‘Enjoy Your Worries, You May Never Have Them Again’ by the Books!

10 Responses to Finger-wagging on flag-waving