It was a really, really small Chinese flag

The New York Times seems to be getting heavy on Hong Kong colonial nostalgia. A couple of weeks ago, one of its columnists offered this moving tale…

THE other day I went into a family-run noodle shop and when I paid, I handed over a colonial-era one-dollar coin with the British queen’s head. I instantly felt a pang of regret.

“Sorry, could I swap it? I want to save the one with the queen’s head,” I explained…

In its report on yesterday’s pro- and (mostly) anti-government marches, the paper encounters a carrier of the blue ‘dragon and lion’ banner…

She said that she was displaying the flag as a nostalgic symbol of a time when the Hong Kong economy seemed to offer more opportunities for young people, and when Britain, before the return to China, was granting the people of Hong Kong growing autonomy. 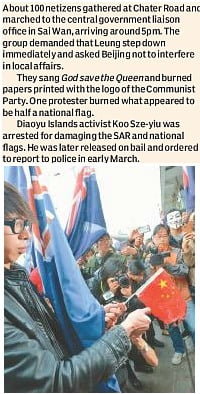 You can dab tears from your eyes, or you can get arrested over it. The Standard (on page 2) says that one group of protesters yesterday sang God Save the Queen – which is borderline surreal – and someone was arrested for burning the People’s Republic of China and current Hong Kong flags. And can it be any coincidence that the street where radical legislator Long Hair Leung Kwok-hung underwent his inevitable detention by the cops was… Queen’s Road Central?

This symbolism is almost calculated to drive a particular type of patriot berserk with rage. But the reports all suggest that most of the marchers on the pro-government assembly, with their uniformly dull, mass-produced placards, were less than passionate, and not simply because their average age seems to have been 20-30 jaded years higher. House News reports that at least some of the people marching in support of Chief Executive CY Leung received HK$250 each. This is no great surprise, until you get to the glorious and exquisite detail: the cash was dispensed by someone operating out of a portable toilet.

You couldn’t make this up. Numbers, on the other hand, are easy to fabricate, and the gaps between police and organizers’ estimates for the sizes of the demonstrations are so wide as to make them worthless. The pro-CY (‘silent majority’) group estimates it attracted 60,000, while the cops say 8,000; the anti-CY organizers claim 130,000 versus the cops’ 26,000. By all accounts, the anti-CY march looked distinctly bigger than some of the more embarrassing July 1 events in years past, but nowhere near government-toppling-size.

The Leung administration has a policy address and annual budget to deliver. It will be interesting to see how the still-new leadership uses the opportunity to unveil attention-grabbing, agenda-setting, populist measures – or at least how it tries to.

CY and gang are long on big, if vague, well-meaning intentions but short on ability to implement. The tycoon-bureaucrat nexus and the pro-democrats are both willing CY to fail in whatever he tries to do, from building more affordable housing to cleaning the air. What his team should do is ask: what can we announce that will attract real people with real signs, rather than paid oldies bussed in by the kaifongs, to the next pro-CY gathering? And do it. But what we will probably get is a slightly jazzed-up version of the traditional policy address/budget formats.

The real silent majority probably stayed at home in the warm yesterday. One thing they might have seen had they ventured out was a new phenomenon in Central’s venerable Gage Street: a line of tourists outside the hovel that is the Lan Fong Yuen stall. Apparently, the centuries-old vendor of Hong Kong’s sickly traditional ‘pantyhose’ milk tea has made it into the guide books. Not all of them were speaking Mandarin, but most were. One was a late-20s woman in nouveau-bourgeois bright leather/sequins/perm with a little boy she loudly called ‘Bobby’. Maybe she thought an English name would help them fit in during their visit to Hong Kong – who knows? Unfortunately, the kid refused to acknowledge it. Then, I’m guessing, it was round the corner and up to the egg tarts place.

15 Responses to It was a really, really small Chinese flag