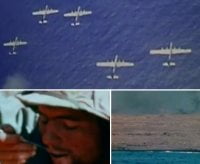 Some interesting things – things that you would never realize existed – have somehow ended up on YouTube. Here’s a couple.

For people with over two hours to spare, Iwo Jima: 36 Days of Hell. The documentary is outstanding for two reasons. First is the quality of the oral history, with extensive recollections from US Marines and others who took part in this bloodbath – at least some of these guys are probably no longer around. Second is the original colour film footage, which, among other things, conveys the nastiness of the volcanic island’s surface.

For people needing a seven-minute fix of weirdness, the trailer and some extracts from Smile Til it Hurts. It’s a documentary about Up With People, a touring performance group through which thousands of clean-cut youngsters passed, notably in the 1960s and 70s. It was originally funded by Halliburton, Exxon, GM and so on (I would guess with some CIA string-pulling). The official aim was to unite the world’s idealistic youth behind upright and positive moral values. In practice, it was supposed to counteract the rebellious, hippy, peacenik, antiwar counterculture – which is what makes the whole thing so hilarious. Middle-aged bureaucrats try to create a political youth subculture to oppose the one they don’t like. You couldn’t make this up.

(UWP is still around, but I think more as a straight high-school exchange sort of thing.)

For the undecided, with a bit over an hour, First Kill. More oral history, with Vietnam vets discussing how it felt taking life – even of children – plus author Michael Herr.