Iodine deficiency in babies used to cause widespread irreversible mental retardation in China. Whole villages suffered cretinism for as many generations back as anyone could remember owing to a lack of the mineral in the soil, and thus the diet. Meanwhile, in prosperous, bustling, well-nourished Hong Kong, manufacturers of infant milk formula implicitly discourage nursing mothers from breast-feeding their newborns, and market their pricy canned powder by suggesting that it will boost its little recipients’ intelligence. Use brand X baby food, they pretty much claim, and your child will get into top schools, do well in exams, go to college, become a lawyer and go on to enjoy a life of shiny luxury cars and expensive real estate. 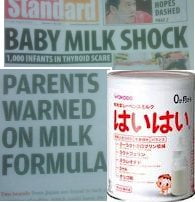 So it is understandable that more than a little panic breaks out when the Hong Kong government withdraws all batches of two Japanese brands of formula from the market because iodine content is ‘rather low’. It is not that the Japanese manufacturers are deliberately trying to stunt little Hongkongers’ future mental abilities. The reason, officials say, is that Japanese mothers have naturally higher levels of iodine, so – presumably – the makers of formula adjust the composition of their product accordingly.

This sounds plausible: the Japanese diet is rich in seafood and seaweed, and thus iodine. But of course the mother’s intake of various nutrients is irrelevant unless she breast-feeds. The implication is that Japanese mothers breastfeed more than their Hong Kong counterparts. Hong Kong women eat plenty of sea produce, too.

There is an opportunity here for the Hong Kong government’s Information Services Department to do something useful and toss out their sillier propaganda campaigns in favour of one that directly links natural mother’s milk with better health and intelligence – that is, something deliberately designed to reduce artificial formula’s market share. I’m sure formula is a pretty acceptable substitute, and I have no doubt that breast-feeding must be a huge inconvenience, but why not openly undermine the formula companies’ dubious claims?

In a similar vein, the government has a lame campaign – you see the posters at the Macau ferry terminal – imploring people not to gamble to excess. Obviously, by definition, you shouldn’t do anything to excess. But why not put out proper hard-hitting ads, telling people clearly what the odds of a decent win are (you’re more likely to be murdered), and humiliating people who gamble at all by stating simply that they are stupid to throw their money away like that?

The answer in both cases, no doubt, is that we must ‘strike a balance’.

On a happier note, the death is announced of one of ex-Chief Executive Donald Tsang’s many ridiculous schemes. This particular one was yet another plot to eradicate Hong Kong as a place where Hong Kong people live and replace it with a tourist zone where local people are shoved aside to make room for Mainlanders and other aliens buying overpriced junk from international chains paying huge rents to our local property developer families.

No-one ever clearly articulated the obnoxiousness of the Tsim Sha Tsui piazza, because it wasn’t so much this single project as a series of decisions that, when you look back, reveal a malevolent bureaucratic mentality. When you add up the removal of the Central Star Ferry pier, the defacement of the TST marine police HQ (reborn as 1881 Heritage) and the plan to relocate the TST bus terminus several minutes’ walk away, the sum is a message. That message says: ‘this part of the city will henceforth serve only interests that profit from tourist traffic; the rest of you can f**k off’.

We are told that the design is unviable essentially for engineering reasons, but the root cause is the clash of local residents’ transport needs with landlords’ desires to attract more overseas shoppers, and the local residents won where the piazza is concerned – something you don’t see everyday.

Nor is this: filial piety – a good wife suckles her toothless mother-in-law while her own baby goes hungry…

Click to hear ‘Safe as Milk’ by Captain Beefheart!