Sunday’s South China Morning Post ran a story about the Hong Kong City-State Autonomy Movement, which had petitioned the UK Consulate to complain about China’s interference in the Big Lychee. The group is pleased to display the piece on its Facebook page.

With a claimed 20 core members, it might be pushing things to call the HKAM a ‘movement’. But it is certainly part of one, namely the anti-Mainlandization, anti-locust, anti-Mainland mother, anti-Mainland cross-border car, anti-simplified character crusade that sprung to life last year. The backlash against Mainland tourists and homebuyers was hardly surprising to anyone who had noticed – and they were hard to miss – the crowds, the influx of luxury outlets and the closures of small local businesses in recent years. To local and Beijing officials rejoicing in ‘integration’, however, the phenomenon is decidedly unwelcome: this is Hong Kong people going massively off-message. Being (apparently) organized and having a quirky sense of symbolism, the HKAM is a particularly unnerving example of it.

The HKAM’s logo is a flag – and not just any flag, but the colonial-era coat of arms, as seen waving in the breeze, and printed on ID cards, tax forms and everything else, back in those days.

The banner appeared at the Dolce and Gabbana protest in January; it also hangs on the wall – 1970s revolutionaries-style – in YouTube videos, and of course you can get it on a T-shirt. The group also likes to unfurl it at the Cenotaph to honour the city’s fallen. If Beijing wanted to arrange a group of ‘subversive’ agents provocateurs to justify pushing an Article 23 security bill through, this is what it would look like, though it is unlikely Chinese officials would have the sensitivity to get the cultural nuances right (yes that’s I Vow to Thee, My Country at the Cenotaph).

If it comes to that, do HKAM’s members fully grasp the provocative nature of this use of the heraldry? They say they admire the juxtaposition of the Chinese dragon and the not-so Chinese lion as an emblem of the city’s unique identity and status, which suggests they don’t realize how spiteful this symbolism is towards the regime in Beijing. So HKAM could be a calculated, if slightly clumsy, attempt to piss off local and Chinese officials as a protest. But there is something more to it. The HKAM people avoid uttering the word ‘independence’ (unlike some weird friends), but they do enjoy theorizing about the city-state and autonomy, and they are into history and heritage. To the extent that they are serious, it is a romantic sort of nationalism, based on an extremely idealized and selective notion of what Hong Kong was like under the British.

That’s still hugely offensive to the Chinese government, and indeed the local administration. Communist newspaper Wen Wei Po carried an opinion piece last year accusing the US Consul-General of masterminding the group. He had previously served in the Kyrgyz Republic – home of a dreaded ‘colour revolution’ – and Taiwan. It all adds up; you can imagine a US diplomat being into Holst. This is standard Beijing logic: Hongkongers want to be less influenced or affected by the motherland, therefore it must be a foreign splitist plot.

Cooler heads are prevailing, however. The incoming administration of CY Leung has vowed a drastic reduction in Mainland mothers’ access to Hong Kong delivery rooms. Officials have modified plans to allow more cross-border road traffic and to introduce ‘national’ civic studies into schools. YouTube clips of unruly Mainland tourists, protests about simplified characters in Agnes B cafes and graffiti on ads aimed at Mainland visitors are signs that something is going wrong (cue heart-tugging HKAM video of property prices rising, shops closing, etc). Waving colonial flags brings the point home by hitting some raw nerves. It gets results. Expect to see them on 1 July.

I present an alternative, for people less enamoured of colonial government, and which neatly sidesteps the simplified-traditional character debate… 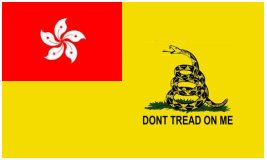