Guided democracy and the rise of mind-numbing non-scandals

Readers of page 2 of the South China Morning Post’s City section are greeted with a strange quarter-page notice declaring simply ‘Jesus Christ, Son Ahman’. It would have been placed, it seems, by faithful followers of imprisoned polygamist sect leader (or creepo pedophile incest wacko with 50 wives, if you prefer) Warren Jeffs. ‘Ahman’ is a Mormon word, ascribed to Adam, for God. Apparently. The poor old SCMP is obviously desperate for advertising revenue.

Still, without that we wouldn’t get any news, and with no news, we wouldn’t learn that Chief Executive candidate CY Leung doesn’t blame the Hong Kong government for its part in the clumsy and feeble smear campaign designed to boost his uninspiring rival, rich-kid Henry Tang. Of course, we all know that the government isn’t biased, because it issued a defensive press release saying that its press releases contain nothing but the facts. (Oh for an administration with the wit to bedazzle us with a statement that its press releases always lie!)

The Standard’s front page has photos of five figures: the CE candidates, plus a pair of young orangutans – no doubt the editor’s silent protest that he is equally unimpressed by all three humans. Brought to you by the same Sing Tao group that previously exposed CY Leung’s supposed financial problems, the paper stresses the government’s even-handedness and gleefully laments CY’s predicament. In fairness, it gives CY’s side of the ‘conflict of interest’ affair, leaving any readers who make it that far awake struggling to find traces of the smoke, let alone the fire.

To put this in context, let’s recall the District Council elections last November, when hundreds of voters gave false addresses in order to augment the pro-Beijing vote in several neighbourhoods. The scale of the vote-rigging required organization, and that can only have been provided ultimately by proxies for the Chinese government. Now the same people present us with ‘dirty hands’ CY Leung versus ‘Mr Clean’ Henry Tang – an interestingly mild smear job, intended to bruise rather than scar. CY, with 2017 in mind, plays along. Beijing has said that public approval is one of the requirements to be CE, and this is how they will improve Henry’s weak position in the opinion polls and meet that pledge.

There is a real irony here. In the past, Beijing rigged Hong Kong elections openly and honestly. But with a sort of quasi-universal suffrage coming from 2017, the Central People’s Government will increasingly have to resort to underhand tactics to ensure that the electorate votes the way it is supposed to. With a one-party system to defend, the Communist state can only permit democracy in the Big Lychee if the process is manipulated through corruption of the city’s much-cherished values – not to mention outrageously lame smears and stunningly boring excuses for scandals. People can be forgiven for wondering whether it’s worth it.

I declare this weekend open with, courtesy of the locust-outing Standard, another great moment in the history of integration with the motherland… 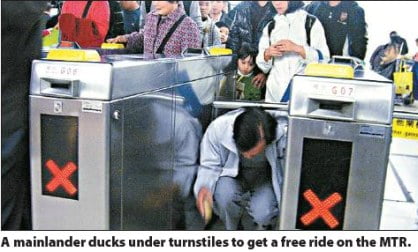