Narrow tax base buckles under weight of budget surplus

Flicking through the 2012-13 Budget with one finger while jabbing the calculator with another, the little sums of ‘relief’ add up. The government will give me back

The resulting total of just over HK$25,000 translates into over four months’ salary-plus-housing for my underworked but dutiful amah, or a surprisingly measly-sounding 550 pints of San Miguel outside of happy hour, or a far better-value 3,000 big cans of it from 7-Eleven. Or I could buy a whole clutch of iPads, iPhones, plasma screen doodahs or whatever. And there’s the HK$6,300 handout from last year’s budget, which I have yet to apply for.

In truth, the cash will just go pretty much unnoticed into the pot. Like the Hong Kong government itself, my revenues exceed my expenditure by an embarrassing amount and I always end up with a big surplus (the differences are that I am merely cheap to run, and I can forecast the leftover sum quite accurately). Either Financial Secretary John Tsang shouldn’t have collected the 25 grand from me in the first place, or he should have thought up something useful to do with it. But what can one humble member of the squeezed middle class do?

A variety of robotic accountants and fiscal experts quoted in the press today recite the mantra that Hong Kong’s tax base is ‘too narrow’. It is true that very few people pay more than seven or eight percent of their income in tax; the same goes for companies (also benefitting from yesterday’s ‘relief measures’), most of which mysteriously make too little profit to concern the Inland Revenue Department. John Tsang may have perceived such worrying narrowness when he predicted an HK$8.5 billion deficit for 2011-12. But after he later found he had a HK$67 billion surplus, he could be forgiven for thinking that this is the sort of ‘narrow’ we can live with.

In fact, if we further squeezed the salaries/profits tax base until it were just an atom wide and yielded one penny a year, we could still get by. (OK – it would blow something like a 20% hole in the public finances. But bring civil service pay halfway back into line with the private sector, and voila! We’re back in surplus.) To outsiders, this must look like a deliriously happy state of affairs: this place hardly collects any serious tax from anyone and still has mountains of budget surpluses piling up year after year.

In some ways, it is miraculous; for those of us whose affairs are in order (especially having freed ourselves from the grip of the property scam), the money roles in, and you give the government a little dribble of that, and then the government gives you some of it back again, and there we all are with John Tsang like kids in a bath full of foam, throwing the stuff at each other and in the air.

In other ways, however, we are talking grotesque distortions, not least by which a segment of the population who mistimed property purchase, or simply their era of birth, now carry the weight, via killer mortgages or rentals, for the rest of us. And we are talking gaping vacuums where money should be flowing but isn’t. Billionaires enjoy tax-free investment income, while one Ms Hu and kids talk to the South China Morning Post in an 80-square foot partition and get none of the little public-housing rent waivers and welfare bonuses John Tsang is once again scattering among the poor-but-not-too-poor (her landlord pockets the electricity subsidy).

Naïve, she still has a bit to learn about the Hong Kong way…

In the eyes of the government, they hope we simply don’t exist and all people are tycoons and the middle class… 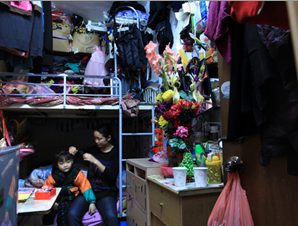