It is the run-up to the Winter Solstice and Christmas, and Hong Kong celebrates the season of good cheer with pestilence, barrier tape and bitter feuding over how many inches there should be on each side of a square foot.

A traditional delicacy for the shortest day in the year – barely-plucked, almost-still-breathing chicken – is banned as the government freaks out over the discovery of H5N1 avian flu virus in a sample carcass at a market. It will be chilled poultry or none for the next couple of weeks, which is an outrageous imposition in a culture where only a freshly killed bird has any flavour. (The lateral thinkers’ solution of currying it is out, on the grounds that the resulting dish may have sweetness, sourness or spiciness, which would be a hideous shock to many hypersensitive local palates, not to say deleterious to health.)

Or that’s the theory. But what do we have here, 50 yards from a certain street not far from the central business district? A-Kwok and his buddy the driver and their 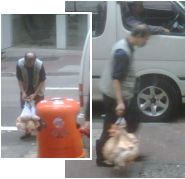 little white van, delivering half a dozen of the creatures, still-warm and guaranteed to be tasty, succulent and beneficial to feng-shui – probably destined for a classy restaurant with fussy but rich customers. Even during times of government-imposed scarcity, you can have whatever you want provided you pay through the nose for it.

As our property tycoons will confirm. They are undergoing anguish at the moment after the government suggested that they base prices for new apartments on the amount of space within the units, without including bits of hallway, mailbox, swimming pool, elevator shaft and other building features, thus enabling them to offer a nasty 480-square-foot hovel as a sprawling 620-square-foot palace. (Or, more to the point, allowing them to hide the fact that they are charging the buyer 6.2 rather than 4.8 times the property’s probable true value as a real economic asset to the human race).

The government, in an apparent fit of premature senility, is proposing that whoever buys such honestly advertised homes from the developers will be free to revert to the old system and sell it on as larger/cheaper. The Real Estate Developers Association leaps on this illogical idea – there is no difference in substance between first-hand and second-hand flats – and demands that the cutoff point at which the sellers become legally allowed to lie about apartments’ size should be the stage at which the property is completed.

Why can’t we simply require by law that all homes, old and new, are advertised as their real, actual, internal size – for which an official definition exists? Just as a five-kilo bag of rice contains five not four kilos, a big box of eggs contains 12 not 10, and A-Kwok delivers all six of the illicit fresh chickens ordered, not five-plus-one-in-a-swimming-pool?

Among the objections I can think of… It would require the poor overworked real estate agencies to change the flat sizes on all the ads in their windows and on their websites. (But they change the prices every other day.) It would be ‘unfair’ to forbid someone who bought 480 sq ft plus 140 invisible sq ft in the past to sell the invisible bit in the future. (This is a genuine old REDA argument, delivered with a straight face: ‘it will make everyone’s apartments smaller’.) Failing that, it will ‘confuse’ everyone. (To describe 480 sq ft as 480 sq ft – yes, that would leave us all totally perplexed.)

It would be a slur against this Yuletide season of good will to suggest that our officials deliberately put forward an illogical proposal so as to give REDA a chance to shoot it down, find a loophole, or recommend something equally idiotic in return. But it’s either that or they’re plain witless. 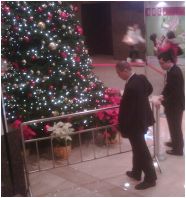 To make ourselves feel better, let’s take a stroll around and admire the tasteful barriers and nylon tape erected around this year’s Christmas decorations. The lovely curving symmetry of the semi-shiny metal, and the sensual, colourful tautness of the ribbon stretched out with landlord’s logo on it. All beautifully arranged by special, Ikebana-trained security guards, to keep curious children, maids and the elderly from the dangers of getting too close to the potentially volatile and easily panicked tree.

And from yesterday’s Standard, an only-in-Hong Kong headline…