I bumped into a long-lost former colleague en route to the office this morning, and he suggested we have a quick coffee in the nearest convenient place: the Starbucks in the ground floor foyer of Jardine House. It was around 8.15. We ordered and paid quickly enough but then found that some eight or so people were already milling around the far end of the counter waiting for their drinks. We joined the throng and watched the harassed serving wench darting back and forth, squirting steaming liquid into cups, putting lids on them and setting them on the counter with bilingual announcements of their contents.

Coffees came, and coffees went. The line of customers coming in to order lengthened, and the group waiting to get what they had paid for grew bigger. Some busy inhabitant of this building of investment bankers apparently gave up hope at some stage, leaving a single cappuccino unclaimed. It was five minutes after we had ordered our double espressos, and I was tempted to grab it instead – but self-consciousness got the better of me: wasn’t everyone thinking the same thing, and wouldn’t they all look at me as the impatient delinquent who took someone else’s drink? So we waited some more.

Various giant lattes were delivered and scooped up, the crowds at either end of the production line grew even bigger, and any chance of getting a member of staff’s attention was lost. My watch was approaching 8.26, and I turned to my friend and said I had to be somewhere at 8.30. He did too. So we retreated with no coffee to show for our money and time. “We must, um, do this again sometime,” were my parting words. The amazing thing is that so many of the people in that Starbucks seemed to regard this half-anarchic half-Stalinist retail experience as a perfectly normal and even enjoyable start to the day.

How different it would have been as one of the 66,500 of 237,000 voters eligible to take part in the absurdity yesterday  known as the 2011 Election Committee Subsector Elections, with heavily staffed polling stations handling – by my calculation – an average of one customer every two minutes. In some constituencies, like the shoeshiners’ parade known as the CPPCC, the results have an almost North Korean feel about them.

I suggested a few days ago that electors in the Commercial (First) Subsector might like to vote for a trio – Messrs Cautherley, Shaw and Wong – who had pointedly endorsed the principle of government for Hong Kong as a whole rather than for vested interests. Three of the 21 candidates failed to be returned; can you guess which three? 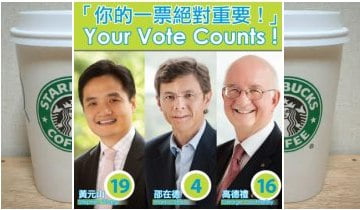 Click to hear ‘One More Cup of Coffee’ by Calexico/Roger McGuinn!

24 Responses to Coffee shop cheats customers, and other scandals