And the U-turn du jour is…

Hong Kong – the land where the standard, simple procedure whereby the mid-term resignation of a legislator triggers a by-election has mysteriously mutated into a giant loophole that a petrified public is begging the government to plug before it wrecks public finances and eats all our children.

On the whole, the city’s leaders have been given a surprisingly easy ride given the sheer falsehood of the ‘loophole’ scare. The real fear is labeling a by-election a referendum, and the people wetting themselves about it are the officials from Beijing. Yet few of the government’s disorganized and squabbling opposition successfully articulate the point that there is no loophole; it’s everyday democratic process, and the voters can deliver judgement as they see fit.

Still, despite their occasional ineptitude, the forces of reason and enlightenment can push Donald Tsang’s fast-wilting and hapless administration around. And so it comes to pass that a public consultation on the by-election ban, which was neither necessary nor possible just a few moments ago, is suddenly to go ahead. Looking at the video of the announcement, it is not hard to see how the three officials concerned fortified themselves before being pushed at bayonet-point before the cameras…

Chief Secretary Henry Tang, hurriedly and distractedly reading the press release, is on uppers and booze; Secretary for Justice Wong Yan-lung seems to be miles away on 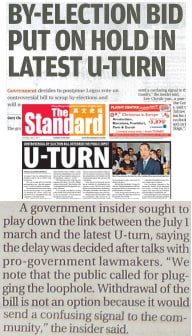 Quaaludes; Secretary for Constitutional and Mainland Affairs Stephen Lam would appear to be tripping out on mushrooms – and who among us would not be if we found ourselves in his place?

The South China Morning Post quotes Insi Der, the omniscient and omnipresent government spokesman, as repeating the public-wants-loophole-plugged mantra. Ms Der then adds that withdrawing the bill is not an option because – and she has a perfectly straight face as she says it – it would send a confusing signal to the public. We can’t have that, obviously.

A public consultation wasn’t an option either, of course. Critics dismiss it as a ‘fake exercise’ as the government clearly intends to simply suspend the bill mid-course, let the opposition do its worst, and then push it through after summer. It will have the votes then because the main objection of government-friendly but skeptical lawmakers like former Security Secretary Regina Ip has been the lack of a consultation, not the actual ban on by-elections.

Officials still have reason to worry. Excitable pro-democrats threatening a long hot summer of demonstrations against the evil law are one thing, but the Bar Association is another. The tone of its brief press statement on the consultation contains just a hint of menace, or at least deep confidence of an ability to inflict damage and pain.

Some people are already feeling the hurt. Stroll along the wrong walkway in Central this morning and you would be presented with a free copy (is there any other sort?) of the local edition of China Daily. In its page of Hong Kong opinion (more than the SCMP gives you) a staff writer called Bob Lee heaps praise on the Democratic Alliance for the Blah-Blah of HK for feeling the public’s pulse and offering constructive suggestions to the government.

Could this be the same DAB that, as good Communist front-men should, loyally and loudly opposed calls for a public consultation on the by-election ban, agreeing with officials’ every claim about the impossibility of such an exercise, and is now left looking stupid and kicked in the teeth following the government U-turn? Yes it could.

14 Responses to And the U-turn du jour is…