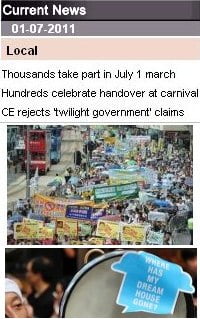 A quick glance at RTHK’s news website on Friday afternoon showed an interesting juxtaposition of headlines. The ‘thousands’ on the annual 7-1 march turned out to be 50,000 according to the police, whose estimates of such figures these days are treated by the media as fiction, or over 200,000 according to the organizers, who are saintly, objective and meticulous and blessed with inerrant crowd-counting ability. It was, beyond doubt, the biggest number on the streets since the 2004 demo, which had the pulling power that only then-Chief Executive Tung Chee-hwa could provide.

The ‘hundreds’ – probably ending up at 20,000 or so in full – referred to the wholesome, non-spontaneous loyalist counter-event celebrating the reunion of Hong Kong with the glorious motherland. Of the “largely elderly crowd,” as subversives at RTHK put it, “many had been brought … by a fleet of tour buses.” In other words, enticed into coming, some reportedly lured by an offer of a free bottle of soy sauce. You could also enjoy the People’s Liberation Army Band performing patriotic tunes in, of all places, the Queen Elizabeth Stadium.

The government meanwhile issued statements anxiously claiming that it was committed to a better Hong Kong and attached great importance to public views. The paucity of people who would lend the slightest credence to these assertions was then displayed with pride to the world, and to the distinct sound of the bottom of barrels being scraped, in the form of the Handover Day list of honours recipients.

The Grand Bauhinia Medal, the most important civic laurel of them all – reserved for only the highest level of government official, the richest of billionaires and the most esteemed of patriots – went to two figures: Executive Council convener CY Leung and Lan Kwai Fong mega-landlord Allen Zeman. The fact that Leung did not already have this bauble shows how strictly rationed it is. The award of one to Zeman, best known to the public as a vendor of overpriced beer in tacky themed bars, indicates that the list of eligible recipients is growing short. The great fear among tycoons who receive these medals, in particular, is the prospect of the awards’ future devaluation; a native of Zeman’s standing would ruffle feathers.

The Gold Bauhinia Star, the next rung down, went to an embarrassingly large number of senior civil servant-turned politicians (Edward Yau, Environment; Eva Cheng, Transport/Housing; Rita Lau, ex-Commerce) or plain bureaucrats (Christina Ting and Yvonne Choi), plus a pair of judges. This is partly because many of them may not be around in a year’s time when a new administration takes over, but it is mainly part of this overall trend; the government is running out of lackeys, and the pool of people to whom top medals can be awarded is being used up faster than it is being replenished.

Lawrence Lau is one of Chief Executive Donald Tsang’s second-tier shoe-shiners – not in the same league as Grade One flunkies like Ronald Arculli or Anthony Wu, but always useful for appointment to a board or committee to endorse whatever vacuous blather the administration is pushing that day. Jeffrey Lam is similar. Anna Wu is a government-friendly pro-democrat rehabilitated as an Executive Council member after being ejected as head of the Equal Opportunities Commission for humiliating the Tung administration years back.

Further down the list come various people who actually have some relevance to the Big Lychee’s population; a few have even made real contributions to the city through voluntary work and other activity, though they are scattered among at least as many United Front toadies being given a pat on the head for organizing day

trips for old folk to pad out the numbers at tedious politically correct gatherings. Mostly, however, the people being honoured would have meant nothing to Friday’s marchers except insofar as they inspire disdain or perhaps pity.

One curious little feature of the big march on Friday: flags. The Republic of China banner often appears at pro-democracy demonstrations, thanks in some cases at least to pro-Kuomintang elements (I think some Falung Gong members sport them too). What is more unusual – though I do recall seeing it once or twice in the past – is the use of the colonial-era Hong Kong flag. Whatever message the people carrying them were trying to convey, I don’t think any Beijing officials monitoring the protest would have liked it.

Click to hear The Bad Seeds ‘Sick and Tired’!