Unaccustomed to signing works for eager buyers and seeing my own creations hanging on a gallery wall, I have been taking a slightly more-than-usual (where ‘usual’ means zero) interest in the issue of intellectual property and copyright. This was prompted by the exhibition; as several viewers noticed, such creations as Rita and Tung and First Ladies, and so many others, contain more than a little material drawn from elsewhere…

The question is: at what point does the plundering of what arty circles call ‘found’ material – an even fancier term is appropriation – cease to be in some way convincing and become naked stealing or even plagiarism?

This doesn’t just apply to graphic art. Musical duo The Books produce collages and compositions using a combination of their own instrumentation (guitar and cello) processed with samples of ‘found sound’ from obscure sources (old Linguaphone discs, newsreels and B movies, for example). Try Enjoy your worries you may never have them again. Try suing them for incorporating a sound you own into it (check what appears to be a female tennis player’s cry brilliantly spliced in at 0.36-37.)

Over in the world of video we have IP vandals and parodists extraordinaire Negativland. The following was “done with help from Disney animator Tim Maloney, who created this using his employer’s equipment after hours … combines the sound of a music industry lawyer with the voice of the Little Mermaid and Negativland’s helium-tinged cover of Black Flag’s Gimme Gimme Gimme.”

This seems promising; you can almost fill a work with others’ material provided you mash it up in such a way that you can declare it original, such as ripping off footage of a Disney character and adding a soundtrack of someone threatening to sue you. It’s a grey area, obviously, but ‘fair use’ seems to go a long way. 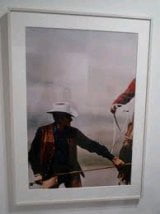 Then, advertised in Hong Kong newspapers last week, was Richard Prince. Prince is, among other things, the master of rephotography. He takes photographs of other people’s photographs. His most famous series is of the old Marlboro Country cowboys, of which a straight-faced appreciator of art could write:

Prince’s artworks excise all the copy from the original ads, letting us concentrate entirely on how their pictures work. Prince also enlarged the advertising pictures. Some almost fill a wall: That lets us clearly see the dot patterns of the original magazine pages, so we know we’re zooming in on ads, not on the subjects they depict. We’re instantly aware, that is, that Prince’s art is about printed pictures of cowboys, and how those pictures shape and are shaped by the world around us. They’re not about the cowboys themselves.

The nurse pieces, one of which advertised his Hong Kong exhibition, started off as cover artwork of 1950s pulp novels about female medical staff. Prince blew them up and partially painted over them, obscuring background and invariably adding a surgical mask. The art critic for the Center for Nursing Advocacy gave the works three stars. Judge for yourself at the Peddar Building.

Cariou sued; Prince argued that his use of the pictures was transformative, but ended up having to destroy millions of bucks’ worth of his works.

I have carefully made a note of that word ‘millions’ – I mean, ‘transformative’.