In addition to the many well-documented and patently obvious reasons not to be a low-income, disabled, elderly, ethnic-minority, Mainland immigrant student who can’t afford self-financed cancer drugs, there’s this…

It doesn’t get much more gruesome: the Community Care Fund Steering Committee coming to sort out your problems.

At left, wearing the silly Nehru jacket in a vain attempt to distract attention from his English name, is Bunny Chan, perhaps the archetypal second-tier government shoe-shiner, willing to serve on countless dozens of rubber-stamp committees in exchange for pats on the head from the big boys and a Silver Bauhinia Star – the most insulting medal in Hong Kong’s carefully calibrated range of toady-rewards. Next to him is Professor Law Chi-kwong, a social work specialist and sort of mildly pro-democracy version of Bunny, sitting on an equally lengthy but slightly groovier-sounding list of advisory bodies.

Next along, reading out his prepared statement, is Chief Secretary Henry Tang. It is the lot of the CS these days, now the post no longer serves as the all-powerful messenger between the Executive Council and the policy bureaus, to perform humiliating tasks to make insecure Chief Executives feel better about themselves. Donald Tsang, in the post-SARS era, was given the job of running Team Clean by his spiteful boss Tung Chee-hwa. Now it’s Donald’s turn, and he taunts 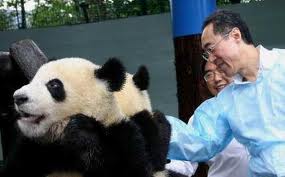 Henry by making him the city’s tree czar and chairman of the aforementioned Community Care Fund, and appointing him (shown right) senior artificial inseminator of panda bears at Ocean Park.

Lastly, on the right up there, is the smug rotundity that is Anthony Wu, a personage of such omnipotence that he can simultaneously head up the Hospitals Authority, the HK General Chamber of Commerce and the Bauhinia Foundation ‘think tank’, while serving as a member of the Chinese People’s Political Consultative Conference, the HK Jockey Club and every Pan-Pearl River Delta Strategic Blah-Blah Commission his friend Donald can dream up to appoint his cronies to. The word is that he will follow Henry as Chief Executive one day (don’t worry – we’ll all have moved to Zhuhai by then).

The big announcement is that the Community Care Fund will be lavishing nearly three-quarters of a billion bucks a year on 300,000 needy people suffering from one or more of 10 categories of deprivation. The Fund is a classic example of Donald Tsang-Thought in action. Sir Bow-Tie launched it late last year, after public uproar over the property cartel’s thieving ways, by extracting HK$5 billion in donations from the top tycoons and promising to match it with official funds. The idea was that we would all suddenly start loving the tycoons and the government again.

The avowed aim of the fund is to subsidize the impoverished who have fallen through the – apparently gaping – cracks in the welfare system. By raising money through property magnates’ donations and a one-off injection from the treasury, we are supposed to avoid sliding down the slippery slope into a high-tax welfare state. But it is also a PR thing. Donald doesn’t like Hong Kong’s numerous non-governmental (though mostly publicly funded) welfare agencies, probably because they tend to be outspoken and critical, but quite possibly also because he would like his government to get more of the honour and glory and praise for helping the poor. So the Fund is partly a way of sidelining the charities and social service NGOs and getting the Donald-HKSARG-Benevolence® brand into the limelight.

Note the implication underlying all this that government and the business cartels are somehow of comparable status in terms of their relationship to the population: equally unaccountable, equally remote, and equally paternalistic – or parasitical, according to taste. The notion that common people and political leaders might be on the same side against exploitative business practices is nowhere to be seen; nor is the notion that the business community and wider population might be on the same side in the face of an overweening public sector or inept governance. It’s a corporatist arrangement. Obviously, businessmen will do whatever they legally can to make profits. What is significant is the attitude of the government: oblivious to the fact that it is acting as an interest group in its own right, vying with its own populace for resources and even face.

I wonder whether any of this occurs to Bunny?