A propaganda official justifies the ad on the grounds that China lacks the USA’s films and other popular media that promote its national image. Chang believes the film panders to China’s own warped self-image and if anything will alienate foreign viewers. I haven’t seen it, but I would bet that the ad agency and the lower-level bureaucrats had the top ranks of the State Council Information Office in mind as their prime audience. If the bosses are flattered and happy, who cares what anyone else thinks?

Some years ago, I was on a tour bus crawling into Shanghai from the airport with a group of American business folk who were essentially being hosted by Hong Kong counterparts eager to show off Asia’s economic miracle. Someone had the bright idea of running a PR video the city had commissioned on the vehicle’s AV system “to show the visitors what the city was like.” The laughable film (by Lowe & Partners?) showed space-age views of the new skyline taking shape in Pudong interspersed with action shots of trendy young people – yellow, white, black and in wheelchairs – grinning, dancing and playing volleyball. Meanwhile, a glance through the bus window showed “what the city was like,” as we trundled through the smog, over potholes, past endless rows of grimy, Stalinesque concrete residential blocks and racially homogenous thousands of shoddily dressed and unimpressed-looking residents.

The Hong Kong government’s own news website has recently increased its own – already prodigious – output of self-deluding puff pieces about how wonderful our officials and policies are. Until a week ago, the portal provided a simple, daily list of government press releases, with easy access to archives. Now, under the guise of enhancement with customizable features, the old at-a-glance layout has gone (an archive search function is buried away somewhere), press releases are cumbersomely divided by policy area and mindless pap gets a higher profile.

Some of this is no doubt due to Information Services Department staff trying to be imaginative. For example, they have copied the iGoogle drag-and-drop thing, so you can have news on your favourite government bureaucracy at the top of the page – and I’m sure we’ll all rush to do that. But the new prominence given to puff pieces shows a real shift away from information towards something closer to the Ministry of Truth. Thus we can read such scintillating stories as Gov’t strives to meet public aspirations, Statistics Department progresses with the times, China bolsters HK’s financial hub role, and, of course, HK set to seize opportunities, all with cute pictures of the ministers concerned. To what end? Who will even read this stuff, let alone believe it? As with the People TV commercial and the bizarre Shanghai video, someone at the top is nodding in approval, while the rest of us look on in bemusement at what our tax dollars get up to when we’re not looking. 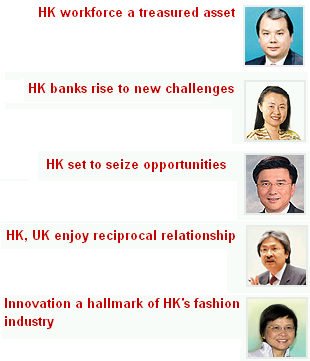