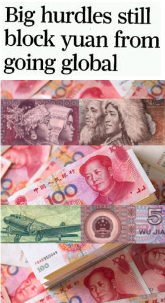 An understatement of a headline in yesterday’s South China Morning Post business section mentions hurdles blocking the path of a global Renminbi. The story quotes a private banker with clients interested in Yuan investments as saying that full convertibility is essential before the currency can be a global one. It also alludes to the apparent contradiction between such private-sector commentators and the Mainland and Hong Kong officials – like our stock exchange boss Charles Li Xiaojia – who constantly blather away about Yuan settlement, Yuan bonds, Yuan IPOs and Yuan everything else as if convertibility were of little consequence.

So when will China’s government allow the country’s currency to move across borders freely? It is much the same question as when it will allow people to propose constitutional reform in writing without being chucked in prison for 11 years, or when it will let itself be replaced by citizens through elections.

A basic rule is that if a country has a freely convertible currency, it may control either its domestic interest rates or the unit’s foreign exchange value (through a peg) but not both. So the question is: when will the Chinese Communist Party, still paranoid and xenophobic after all these reformist years, allow international markets to decide the value of the Yuan, or let overseas governments’ central banks set China’s interest rates? For a clue, delete the underlined words in the previous sentence, and insert the word ‘foreigners’ with a menacing snarl.

So why do the Big Lychee’s great and good go on endlessly about Renminbi business?

Partly, it seems to be a symptom of the morale-sapping Hong Kong-is-finished mentality of our post-1997 administrations. Yuan products are like wine hubs and Islamic banking: straws for desperate, nervous, out-of-their-depth economic policymakers to clutch at.

It is also one of an apparently tiny number of ways they can present themselves as doing something that at least in theory can help both Hong Kong and Beijing. The national leadership realizes that the drift towards looser capital controls is inevitable and one-way, and they seem to think the Big Lychee can serve as a sort of vaguely trustworthy testbed. Such win-wins are much discussed but rarely spotted in real life, so when you find one you treasure it, however trifling it may in fact be.

There is also the matter of Shanghai, which is forever loudly declaring with a victorious and straight face that it has been chosen as the sole, official, divinely ordained, government-anointed international financial centre for Greater China, if not all parts of the planet outside the Eastern Standard and Greenwich Mean time zones, by 2020. It is an impossibility without a fully convertible Yuan (qv), but Shanghai would at least like to take part in the micromanaged and/or symbolic relaxing of Renminbi controls that may be envisaged for Hong Kong. The barrage of blather from the Big Lychee’s financial bureaucrats may be intended to convince the uppity municipality to stick to shipbuilding and fried dumplings.

Finally, a journey of a thousand li starts with a single step. The steps to full convertibility are, all agree, going to be gradual. According to the Post story, Charles Li reckons Yuan internationalization will take two generations, which sounds reasonable when we’re talking about the CCP giving up control over something. It does have a sort of ‘not in our lifetime’ feel to it.

So this is essentially Hong Kong’s strategy to pass the time until it happens: thinking up stuff we can do in Renminbi just for the hell of it.

2 Responses to Coming next: Yuan-flavoured ice-cream