Early Colonial Officials Likened it to ‘the Sound of Ducks Quacking’ 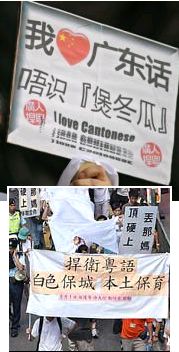 I always thought that Guangzhou City People’s Political Consultative Conference was a group of self-important, shoe-shining toadies who would never make trouble for the government. But I take it all back. After suggesting that prime-time local TV switch from Cantonese to Mandarin in honour of outsiders visiting for the Asian Games in November, the advisors seem to have successfully prompted a mini-uprising of young people in the streets.

The Guangzhou language movement echoes the demonstrations a couple of years back in Hong Kong over the Star Ferry/Queens Piers, which led to the Post-80s movement of boisterous, politically aware youth. A relatively pampered generation questions their elders’ vision of material progress and demands what another place and decade called peace, love and understanding. In Hong Kong, this is a challenge that leaves the government stumped and hoping that it’ll all blow over once they hire someone to maintain Chief Executive Donald Tsang’s Facebook page. In the Mainland, alarm bells go off: the annual bonus and promotion prospects for the mayor and the party secretary depend on the maintenance of stability in the city. This leads to heavy-handed attempts to quash the discontent: count the number of cops marching into People’s Park starting around 2.50 here…

And as we all know, heavy-handed often means counter-productive, and turning an isolated problem you could solve with a bit of good humour into a crisis. Small wonder Guangzhou officials are hastily backtracking and denying any plans to curtail the local tongue.

The pro-Cantonese protestors are not simply addressing a regional issue. Perhaps inadvertently, they are brushing up against some of the foundations of Communist Party national mythology. A lot of evidence – ancient poems that rhyme better in Cantonese than in Mandarin, loan words in Japanese and Korean that sound more southern than northern – suggests that the proto-Chinese language that split into today’s Putonghua-plus-‘dialects’ was more like Canto than anything else. In Anglo terms, this is like saying the Scots popularized by Robbie Burns is truer to the original Angle/Saxon mishmash than today’s standard BBC/CNN versions of English. The difference is that in the English-speaking world such an idea is just an interesting curiosity. To the control freaks of the CCP, a rival and undisciplined version of Chinese culture down in Guangdong is ultimately a potential threat.

They don’t even like to admit that nationalist hero Sun Yat-sen spoke Cantonese. And it’s not a coincidence that they feel far more comfortable with Hong Kong’s Shanghainese (Tung Chee-hwa, Henry Tang, Rita Fan) than with the true locals. No-one seriously foresees the Southern barbarians seceding, but the logic of accepting their non-Putonghua culture as equally valid rather than as a subset of a northern-based, party-approved one leads to unspeakable conclusions about Tibet, Xinjiang, even Taiwan. Hence the homogeny typified by Putonghua, simplified characters, and the fake pan-Chinese aesthetic style found in all those new historic and Buddhist theme parks, where any regional character is heavily sanitized. What next: a unified national cuisine? 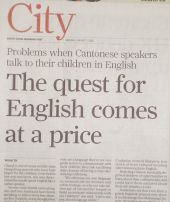 In Hong Kong, a few people have joined in the pro-Cantonese protests out of sympathy. But at least as many people are taking a different approach and trying to insulate children from the vernacular in their formative years by speaking to them only in English. The main problem: these parents can’t speak English themselves. The results, according to the South China Morning Post, are predictably catastrophic.

This is not an anti-Cantonese gesture. The parents are aspiring middle-class types burning to join the elite ranks of the Big Lychee’s (apparently) trilingual, worldly, foreign-educated, property-owning classes best typified by the senior bureaucrats. These oh-so high-class people’s kids speak good English; therefore if your kids speak good English, you will be part of the top group too. It’s confusing cause and effect, but the whole image surrounding our social elite is superficial anyway, with many of its members clumsily aping what they perceive to be the correct style in the first place.

Deep down is a sense of injustice. The people who run Hong Kong get the best apartments on cheap government loans, but essentially force everyone else to buy smaller, barely affordable ones. They drive huge SUVs and belong to semi-exclusive recreation clubs, but expect their inferiors to take the bus and use public swimming pools. And they tell Hong Kong parents they must have their kids educated in Chinese, but send their own offspring to England (to boarding schools that also offer Putonghua). One woman was so deranged by it all last February that she threw herself and her toddler off the seventh floor after the girl failed to graduate from a half-fancy Anglophone kindergarten to its equivalent primary school. It is getting to the stage where Hong Kong is the perfect laboratory for testing the idea that high relative inequality, regardless of absolute levels of wealth, causes mental health problems. If this is Cantonese culture, maybe the CCP have a point. But if this is development and progress, then maybe the Guangzhou and Post-80s kids’ backlash is a good idea.