The meek shall inherit some photos on the Centum Charitas website

The tycoon-owned South China Morning Post and the tycoon-owned Standard today put the spotlight, in their own ways, on scions of Hong Kong’s biggest and richest business dynasties – typically beneficiaries of the tax-farming cartel that is the city’s real-estate industry.

The SCMP reports that Ambassadors of Design wants to co-run the old police quarters in Hollywood Road, which the government has decided to preserve as some sort of hub for creative industries.  Board members include:

Cynics who see a naked property grab coming can probably relax.  All these 20- and 30-somethings have track records of taking an interest in more or less cultural matters (collecting art, running innovative restaurants, etc), at least by their fathers’ philistine standards.  And without redevelopment (which is not allowed) the site’s potential profitability is pitiful – again, by daddy’s standards.

Ranged against the spoilt rich kids are a group of actual working designers calling themselves the Creative Professionals Association, who would like the premises for people like themselves – lowlier-born types who came up in the world the hard way.  The fear is that the well-heeled culture cabal will pull strings to get the place.

For an idea of what sort of strings they can pull, we need look no further than the Ambassadors of Design’s annual ball. The guests of honour were Secretary for Commerce and Economic Development Rita Lau Ng Wai-lan and Deputy Director of Beijing’s Hong Kong office Li Gang.  The event had a tongue-in-cheek Red China theme that presumably went over Li’s head, and the “full support of the Liaison Office of the Central People’s Government in the Hong Kong SAR and the Y. Elites Group.”

Six members of the group were interviewed, including group chairman Jaime Sze Wine-him, who is the son of Sze Chi-ching, a local delegate to the Chinese People’s Political Consultative Conference. Group vice-chairman Kenneth Fok Kai-kong – grandson of the late Henry Fok Ying-tung, a vice-chairman of the CPPCC – also spoke. Four other members spoke – with all but one driving home the same point: Y. Elites Group was not only for young tycoons – it was not a “gang of princelings”.

Except it is.  The organization is essentially aimed at shoe-shining Beijing in order, presumably, to help ensure that the Central People’s Government and Chinese Communist Party continue to apply the dictatorship of the proletariat in such a way as to guarantee the economic and political privileges enjoyed by these families as the older generation fades from the scene.  People not born into or otherwise exposed to it will just have to put up with the video to get a taste of life in this other-worldly milieu.  (Air motion discomfort receptacle advised.)

(While we’re at it, let’s not forget Centum Charitas.  Drawn from a similar, if slightly older, group of scions to Y. Elites, this group was founded in 2007, probably at the behest of Li Gang, to portray the next generation of cartel operators as socially responsible citizens committed to the well-being of all the little people and thus social harmony.  Peter Lee Ka-kit, heir to Henderson Land, is the leading light.) 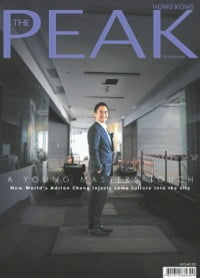 “The cadres of our Party and state are ordinary workers and not overlords sitting on the backs of the people.”  Mao Zedong, Jul 1964