Imagine an institution that encompasses the vanity of Hong Kong tycoons, the grubbiest sort of money-making, determined shoe-shining and the Communist Party’s united front. 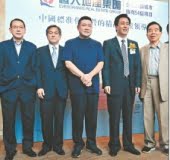 I stumbled upon it while perusing the on-line thoughts, charms and theories of newly listed property giant Evergrande’s boss Xu Jiayin (2nd from right) and noticing that as well as the titles Mr, Chairman and Professor, he answers to ‘Dr’.  This is because Hui Ka-yan, as Cantonese know him, received the World Outstanding Chinese Award, which comes with an honorary degree thrown in from a little heard-of American university – in this case, one West Alabama.

A bit of rummaging around, and we find that Emperor Entertainment Group boss Albert Yeung (far left in the group) also received the Award and the West Alabama honorary doctorate.  Whether the other three fine, upstanding businessmen in the picture – Charles Ho, Joseph Lau or Cheng Yu-tung – have been similarly recognized, I am not sure.

Some tycoons have a curious hankering for symbols of rank, and seem to feel it keenly when they are for whatever reasons not deemed worthy of the better-known academic qualifications or civic honours.  So there is obviously a market opportunity.  Antares Cheng of King Power, for example, not only got the Outstanding Chinese Award, but was feted as one of China’s Top Ten Financial and Intelligent Persons at Diaoyutai state guest house, no less.  This is a sort of parallel universe of recognition.  Most of us, if we have ever heard of Leung Lun of Lung Cheong toys, know him as the sweatshop-factory owner investigated by labour rights activists in 2005.  To readers of the CCP-backed Wen Wei Po, however, he is the Outstanding Chinese Awardee who gets a full-page spread.

The universities offering the honorary doctorates in conjunction with the Award are not, perhaps, household names.  Dr Chrissie Wo of Charmonde Group got her title from a place called Armstrong that receives a less-than-glowing review from one student.  Tony Wong of Jade Dynasty got his from New Castle (or Newcastle), which has no ‘.edu’ extension but claims accreditation from an agency in the Kingdom of Wallis and Fatuna Islands.  (No such place, though a small French colony has a similar name.)

What’s going on here?  The World Outstanding Chinese Association is run by the United World Chinese Association, a united front vehicle.  It also runs Outstanding World Chinese Entrepreneur, Capital-raiser, Investor, Designer, Doctor, Artist, you-name-it associations and awards.  The mainland body that names asteroids after famous Chinese seems to be buried away in here somewhere.  The Awards are handed out every year, usually at the HK Convention and Exhibition Centre, in the presence of a few local worthies from the National People’s Congress and Chinese People’s Political Consultative Conference – the parliamentary equivalents of Armstrong and New Castle Universities. 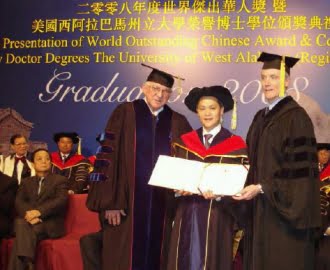 The deal (I happen to know) is that you make a suggested donation, perhaps in the US$50,000-100,000 range.  The nomination form rather presumptuously asks you on the back page to fill in your hat, shoulder and other sizes, so you can wear academic-looking robes at the conferment ceremony when academic-looking white men hand you your doctorate.  Everyone approached is both wealthy and firmly in the patriotic, pro-Beijing milieu.

A bit of harmless fun for self-made rich people sensitive about being poorly educated?  Cruel and sad exploitation of vulnerable, shallow and miserable millionaires?  Or perhaps it is something more sinister: a way for the forces of darkness in Beijing to accumulate leverage over people for possible future blackmail – do as we say or we’ll tell everyone about that time you paid for a phony doctorate from New Castle U.

Or… could it be a devilish plot to undermine the integrity of the Western world’s higher education institutions in the eyes of sensible Chinese people ?  If so, I’m impressed!