In memory of alternative histories 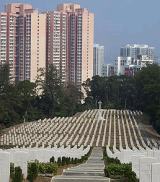 Another Remembrance Sunday in honour of the war dead, another moan about why the Hong Kong government sends the lowest-level official it can find.

Between bombing Pearl Harbor on 7 December 1941 and accepting the surrender of Singapore on 15 February 1942, Japanese forces took Hong Kong.  The city was poorly defended and its British, Indian, Canadian and locally raised troops had as good as lost within days.  In the history of the war – Japan had been conquering parts of eastern and central China for over four years and was now taking over oil- and rubber-rich Southeast Asia – it was a sideshow.

For Hong Kong, it was a disaster.  Take a glance at the shelves in local English-language bookshops, and you get the impression that it was the British who fought, the British who were killed or interned in appalling conditions, the British who suffered, and the British and loyal supporters who continued the war behind enemy lines.  Books like Not the Slightest Chance focus on the stirring tales the target audience wants to hear, and they do it brilliantly.  But the British courage and suffering were largely irrelevant compared with the wider conflict.

The majority of Hong Kong people who survived the assault eventually fled to the mainland in search of food.  Those who stayed often struggled for survival and had little choice but to cooperate with the occupiers.  Many local Chinese businessmen collaborated with the Japanese and in some cases profited handsomely.  Many Indian servicemen switched sides, signing up to a Japanese-run pro-Indian independence movement.

On the mainland, Kuomintang and Communist forces had long been fighting each other as well as – or even instead of – the supposedly common enemy.  The Communists’ agenda was preserving their strength for post-war revolution, while the KMT leadership’s priority was extracting and pocketing aid from the Americans.  Both sides had resistance units in the Pearl River Delta, but the biggest and most effective was the Dongjiang Column, a Communist-led guerilla group that went on to help defeat Chiang Kai-shek’s forces in the region in the late 1940s.  At least, history being written by the victors, that’s the official version.  Given the poor record of the KMT and the traditional strength of leftists in the area it is probably true enough.

Seen in this context, colonial Hong Kong’s traditional marking of Remembrance Sunday always had an insular air about it. The governor turned up in his uniform to lay wreaths at the cenotaph in Central, while members of the garrison lined up and medal-clad veterans in wheelchairs looked on and told reporters about the torture, starvation and death they had seen in the Japanese prison camps.  Some of them were Macanese: mixed-race Portuguese speakers.  In the 1930s and 40s, they had been second-class residents in the notoriously snobbish colony, but now they were heroes; it would not be pushing the truth much to say they were virtually the nearest thing to a Chinese presence in the proceedings.

Soon after the handover in 1997, Hong Kong officially recognized the Dongjiang Column’s role; ex-members living in the Big Lychee received pensions and the names of the fallen were inscribed on the war memorial.  The chief executive stopped attending the Commonwealth-centric commemorative event in November and started to go to a ceremony alongside local PRC officials and Dongjiang Column veterans on the Chung Yeung festival a few weeks earlier.  As well as dispatching the director of protocol – who presumably sends himself – the government still honours Remembrance Sunday with its traditional notice about traffic arrangements.