The recent change in season in Hong Kong following the arrival of the winter monsoon coincides with another biannual event: the news report that Shanghai is about to go ahead with its own Disneyland.  It is a story we have read at roughly six-monthly intervals since well before our own Magic Kingdom even opened for business in 2005.  Now it seems it might finally happen. 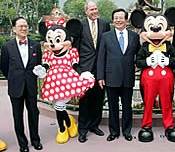 As part of its negotiations with the Hong Kong Government in 1998-99, the entertainment giant dropped heavy hints that it would walk away from the deal and set up shop over the border, either in Zhuhai (close and dumb enough with money to sound credible) or up in Shanghai (then, as ever, about to take over from Hong Kong).  To hear our leaders tell it at the time, this tacky tourist attraction would give a massive, life-saving boost to our economy.

Whether they believed it themselves is hard to say, but bureaucrats gleefully following orders, like the then-tourism commissioner, stuffed public wealth down the Mouse’s gullet and signed a contract essentially leaving us providing the capital and Toontown taking the profits.  So it felt like an act of betrayal when in 2003 Shanghai officials started mouthing off about hosting a real, proper-size version of the theme park.

Sensitive and nervous Hongkongers, already suicidal because of SARS, the property crash and Tung Chee-hwa, were plunged into the depths of despair.  It wasn’t just that, if officials were right about our Disneyland’s future economic importance, a bigger and better facility in East China spelt doom.  It was the very principal that a mainland city could break our monopoly on something.  How can we make a living if we can’t overcharge people for rubbish because they have no choice?

With far more space and cheaper workers, the Mouse’s Magic Middle Kingdom will easily outperform Hong Kong’s.  Some of our officials will have to take a break from spreading panic about marginalization to tell us why a Disneyland in friendly Shanghai will be a wonderful thing, bringing copious amounts of synergy and partnership and opportunity and integration.  At the very least they will have to explain why our Minnie-version will remain an attraction.  (Hint: they’re 700 miles apart.)

Another challenge for our officials is that their wily Shanghainese counterparts, having watched how the southern barbarians begged Mickey to shaft them, will almost certainly negotiate a much better deal.

The Yangtze River Delta offers space, young graduates happy with RMB1,000 a month and 100 million or whatever spoilt only-children whose parents obey their every command.  They don’t need to grovel: Disney wants to be there.  In Hong Kong, meanwhile (just a few months back), the company successfully used sackings of staff as a way to squeeze more out of our administration.  (“Market leads, government facilitates” in action.)

Citizens of the Big Lychee, noticing which city’s leaders played the better hand, will draw their own conclusions.  For the eternal optimists among us, it sounds like a great excuse to shut the Lantau place down, chop up all the castles and caves and burn them (it’s all made of wood, right?) to keep ourselves warm during the colder months ahead.