Race to the heavens: Sun Hung Kai vs NASA 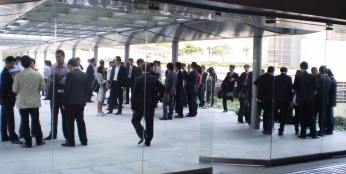 Who are all these spotty, malnourished, mis-coiffeured and untrustworthy-looking people in cheap suits seen gathering at IFC Mall yesterday morning?  They are, of course, products of the Hong Kong education system doing the only thing they are equipped to do: trying to make a fast buck as intermediaries.  Specifically, they are real estate agents pushing Sun Hung Kai Property’s new (indeed, still only half-built) Aria development, which is located somewhere out near Clearwater Bay Road at Fei Ngo Shan, which the company prefers to call Kowloon Peak – emphasis on the second word.

Ask any one of them and they will tell you that this residential project will redefine luxury with the finest architecture and superb views of Victoria Harbour, and residents will be pampered with tailored comfort and pleasures that reflect their taste.  Appear unimpressed, and they will assure you and any passers-by within hearing distance that 100% financing is just a signature away, and within a few weeks, when the developer suspends sales in the hope of ratcheting up the current average HK$9,200 per-square-foot price, you will be able to flip the yet-to-be-finished apartment for a quick 5%, 10% or whatever profit.  Fail to drool at the prospect of easy money, and they will lose control, drop to their knees, hug your legs and beg you to think about their sick grandmother, missed sales target and the misery of depending on commission for a living.

There are more of them than there are units for sale.  They pester most adults passing through the (SHKP-owned) shopping centre, ignoring only those who are clearly manual workers or – usually – non-Chinese.  This supports their promises of higher property prices, as it is a well-known fact that by the time Westerners start to buy real estate, the market is peaking and about to burst.

Meanwhile, literally the best part of a universe away, we have JKCS041: a galaxy cluster that NASA says is the most distant, thus oldest, object ever seen.  It is 10.2 billion light years away.  What does this have to do with SHKP?

The three Kwok brothers who run the company would almost certainly refute NASA’s findings.  They are evangelical Christians who believe that the Book of Genesis is the literal truth (hence the life-size Noah’s Ark at another of their housing developments).  So far as they are concerned, the universe – including light, of course – was created around 6,000 years ago, and it is not possible that the plucky little photons reaching Earth from JKCS041 have spent 10.2 billion years getting here.

Fundamentalists usually insist that geological formations and dinosaur fossils are very recent, left over from the flood that necessitated the then-600-year-old Noah to round up a pair of every life-form and cram them into his boat.  However, when pressed with such science as radiometric dating, astronomical light sources more than 6,000 years old or the evidence of evolution all around us, some of them relent somewhat and say that this is part of God’s test.  Evangelicals believe that they will be judged by their faith rather than by earthly works (which goes back to Luther’s rejection of the Catholic Church’s sale of fast-track-to-Heaven indulgencies).

This is a tough test, if we think about it.  Which is easier: a) giving a bit of money to charity and being nice to people; or b) believing that God placed light particles in such a way as make them appear to have traveled 99.9% of the way from the far end of universe he was building so, 6,000 years later, he could use them to sort out the faithful from rationalists and scientists, whom he could send to Hell for rejecting him?

Further evidence that SHKP’s devout management have cunningly picked the right side comes from a glance at the publicity material.  Only divine intervention could make the US space agency’s graphic of its distant galaxies look less credible than a Hong Kong property developer’s artist’s impression.

Finally, while SHKP enjoys amazing profit margins, and took HK$1.8 billion in revenue from the Aria alone a couple of weekends back, cash-strapped NASA faces savage budget cuts as a result of the US government’s terrible deficit.  Could the Almighty possibly make it any clearer?   They are doing the Lord’s work at IFC Mall.