Vaguely plodding down the road to Stalinism 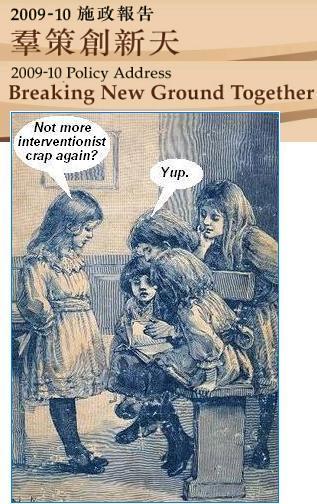 It is unlikely that any political party will object to the moves towards greater economic planning, via six supposedly key industries, announced by Chief Executive Donald Tsang Yam-kuen in today’s Policy Address.  The pro-Beijing DAB are too obedient, the pro-democrats too economically illiterate, and the Liberals too busy drooling over the prospect of corporate welfare.

Although Hong Kong was never run along purely laissez-faire lines, its government did not traditionally allocate resources to specific industries in an attempt to pick winners.  It didn’t nurture favoured conglomerates like South Korea, it didn’t own key companies like Taiwan’s Kuomintang, it didn’t let bureaucrats divert people’s savings into money-losing sectors like Singapore, and obviously it didn’t throw taxpayers’ cash down the toilet on white elephants like the Anglo-French Concorde supersonic aircraft.  Its colonial rulers assumed that the private sector was the best judge of where to put capital, and the evidence supported this.  Hong Kong’s savings in the 1960s-80s were half Singapore’s, yet economic growth was the same; in other words, the Big Lychee got double the return on investment.

Since the handover in 1997, our officials have increasingly adopted a more dirigiste approach.  They played with slogans: ‘laissez-faire’ went in favour of ‘small government, big market’, which has at times been complemented with ‘market leads, government facilitates’.  They arbitrarily declared the local economy to be supported by four pillars (finance, trade, tourism and logistics, or sometimes services).  They diverted substantial public wealth to very lucky companies in order to boost specific sectors, notably with Disneyland and Cyberport.

There are several possible reasons for this.  The population was traumatized by the severe economic jolts that followed the Asian financial crisis in 1998 up to 2003.  For the government of the tragic Tung Chee-hwa, ignoring calls for plans and action was not an option.  At the same time, certain academics and businessmen, possibly with chips on their shoulders from colonial times, were asserting that laissez-faire was British laziness or negligence, and official guidance (by clever Chinese, who understand and love the place, etc, etc) could yield better results.

On top of that, some tycoons and industrialists started to sniff the possibility of free lunches disguised as tax breaks or handouts of land to ‘create jobs’.  (Conspiracy theorists would go further and argue that Beijing has secretly required Hong Kong to provide such advantages to the families that run the property cartel; it sounds far-fetched until you consider the underlying transfer of assets – and the complete absence of any community benefit – that is Cyberport.  Does any explanation make better sense?)

Then there is the mainland/motherland angle.  The Hong Kong leadership insists that the nebulous process known as integration is a matter of great urgency.  It seems to mean cooperating with local officials on the other side of the border who still think in terms of sector-specific planning.  More recently, it has led the Big Lychee’s government to promote the city’s involvement in China’s five-year plans.  This is basically about symbolism; it sends a subliminal message to the Hong Kong people about their once-proud city’s helplessness and dependence on the beneficence of Beijing, and it conditions people to see interventionism as normal.

Perhaps the biggest reason for this drift to economic planning is simply that we are being run by idiots.  Longstanding policies on land use, competition and other fun areas that contribute to the Fragrant Harbour’s unique character have left the city with an artificially narrow economic base.  The government has distorted the Hong Kong economy and made it too expensive for many commercial activities to be viable.  Rather than fix that, our officials add to the distortions by creating more cross-subsidies and un-level playing fields.

This leads to a possible, brighter explanation.  Donald’s six key industries are, to put it bluntly, lame as hell.  Education and health care are derivative.  Tech is hackneyed.  Creative is vague.  Environmental is desperate.  Certification and testing is amusingly opportunist (checking mainland milk for lethal additives because mainlanders don’t trust each other to do it).  They officially appeared earlier this year as the work of a talking-shop called the Task Force on Economic Challenges, but they have all the hallmarks of being dreamed up by a committee of civil servants under pressure – the Hubs-in-a-Hurry Working Group.  Note the dazzlingly original idea of real estate as state aid: it’s all about letting people use some space without having to go through the property cartel.

It could be that this is just more symbolism, an attempt to appear to be doing something, to take all our minds off whatever dark thoughts we might otherwise have.  It all depends on how serious the handouts are.  Are the parcels of land big enough to accommodate significant operations?  Are any other subsidies meaningful enough to influence big investors’ behaviour?

Think about it – the Donald Tsang administration actually making a bold, momentous decision that results in a major change of direction for Hong Kong.  It doesn’t ring true.  Wherever the road is going, we dawdle.  So we can quite possibly breathe easy.