Long, long ago, back in the days when you could buy a can of San Miguel for 90 cents, it was considered noteworthy that Hong Kong had become wealthier than certain western economies.  Our per-capita GDP, we were told, had surpassed that of Portugal, then Greece.  In the following years, the government and media proudly announced that we had overtaken the UK, and then Canada.  What they didn’t bother mentioning more recently was that this process seems to have gone into reverse.  The Big Lychee now trails Canada and the UK, is on line to fall behind Greece before too long, and could on present trends find itself poorer than Portugal again in a few years: 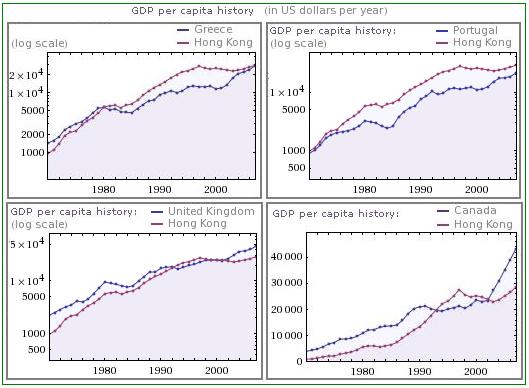 The figures are, of course, averages for whole populations.  There never really was a time when most Hongkongers were wealthier – adjusted for purchasing power, welfare subsidies and so on – than most Brits.  Throughout the 1980s, 1990s and 2000s, a stroll around the bulk of our neighbourhoods outside Hong Kong Island revealed a city that in terms of living standards looked roughly on a par with Kuala Lumpur.  But why has the trend taken a turn for the worse in the last 10 years or so?

Before the great global crash of 2008, our officials tended to blame the Asian financial crisis. But this was wearing pretty thin seven, eight, nine years after the event.  There was some talk about the British leaving ‘time bombs’ behind after they left, out of spite, but that one never took off.  Understandably, the government doesn’t want to accept that incompetent policymaking, especially an inability or unwillingness to implement structural reforms, is a factor.  Specifically, they don’t want to dwell on the impact of immigration.

The decision after 1997 to speed up the flow of mainlanders coming to live in Hong Kong to over 50,000 a year, mainly with little cash and few skills, may have been partly humanitarian: most of the newcomers were entering on what was essentially a family reunion scheme.  But it would also have met with the approval of Hong Kong’s industrialists and tycoons, who had been lobbying in the 80s and 90s for looser controls on incoming cheap labour.

It would also have pleased Beijing to see the wayward, foreign-influenced city’s demographics weighted more heavily toward core, home-grown 100-percenter Chinese; after all, they do it to Tibet and Xinjiang.  Add over half a million loyal citizens untainted by exposure to western ideas, subtract maybe a quarter of a million middle-class Hongkongers who left in the years leading up to the handover, and you have a noticeable boost in the percentage of the population taking part in nationalistic activities and voting for patriotic parties.

You also increase the ranks of the low-earning, and thus the number of people falling below the HK Council for Social Service’s poverty line, now one in six.  (If we were truly paranoid, we would ponder the possibility that Beijing saw an injection of poor people into the once-vibrant and confident colony as another way of bringing the place to heel, but in the joyful spirit of the 60th anniversary of the PRC, we’ll let that one pass by).

So we come to the minimum wage.  Back in the days of 90 cents-a-can beer, it would have been unthinkable that Hong Kong, bastion of capitalism, would have considered such a heresy of free markets.  But the government is going to go ahead next year.

So far, the frenzied chattering about this issue has been among the middle classes determined to preserve their right to hire Filipino and Indonesian women as house servants on unlimited hours for less than US$500 a month – which they will.  The real debate, which Labour and Welfare Secretary Matthew Cheung Kin-chung gently skirts around in a boring article in all newspapers today, will be between bosses and workers over the minimum in dollars per hour for everyone else.

Some staff in fast food chains and cleansing companies are currently paid as little as HK$18-19 an hour.  Employers might hope to get away with a HK$25 figure, but the government – petrified at the prospect of disharmony – will probably make it HK$30 or so.  At today’s exchange rates, and adjusted for an eight-hour day and 20-day month where jurisdictions use daily or monthly rates, that would leave Hong Kong ranking as follows:

From some people’s point of view, we’ve already dropped below Portugal.