The best thing since sliced ice

In a mutually beneficial exchange of limelight, the two desperate publicity-seekers Hong Kong and Sarah Palin met up yesterday, exchanged greetings and parted ways, each no doubt quietly thankful that it would be a while before they would have to encounter such alien freakishness again.

Sadly, when I checked my diary a few weeks ago, I found that I was already booked for a session of Flood-It, so I didn’t make it to the CLSA investors’ conference at the Grand Hyatt.  Although the press was supposedly barred, Palin’s comments are open to all once you sift through the jokes about what she can or can’t see from her window.  Take the lady seriously, as the Wall Street Journal feels a need to, and it was sensible stuff.  Of course it was: it was written for her by people who think she could be a vote-winner in 2012 and want her to sound like she is fit for the job.  Come to mock, like the UK’s leftist Independent, and it was a farce.  And there is a valid point here too: the idea that the US will elect her president is laughable.

Speaking of jokes, what were the hosts up to?  Unlike most brokerages that try to spice things up by being funny from time to time, CLSA actually succeeds.  These are the analysts who brought us the Feng Shui Index.  Not satisfied with snickering up their sleeves at people who read that annual prank and think it’s real, they now proudly present Sarah Palin.  If anyone accuses them of being cruel, they can always point to her hefty appearance fee.  Hong Kong needs more corporate jesters like this.

Were the audience members who left after an hour being rude?  No – as Castro or Gaddafi would find, if they turned up in the Big Lychee and delivered one of their rousing orations, Hongkongers are busy.

Palin promised “A view right from Main Street, USA.”  Maybe Main Streets in Alaska are buzzing, but the one I know is in a pitiful state.  The railroad closed down decades back, then they built the Interstate 10 miles west, then the hotels shut, half the stores and gas stations closed, people moved out, there’s only one doctor left, there aren’t enough kids for the school.  The parking meters take nickels.  The star student – she dreams of starting her own theatre company one day – won’t be seen again once she gets a drama college place in the distant city.  People have views, but not Sarah Palin’s quasi-worldly simplicities.  The pros and cons of a Wal-Mart is a hot topic.

If Palin wants a metaphor, she should say she speaks for the suburbs.  That’s where most people live these days.  Where presidents get elected.  But somehow it doesn’t sound right.  People read newspapers in the suburbs. 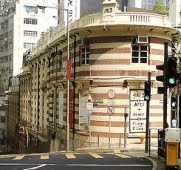 Still, Sarah Palin and her supporters can fairly argue that she is the best thing from Alaska to hit Hong Kong since the invention of refrigeration.  Ask anyone who knows the origins of the big, straw-wrapped chunks of glacier that used to be stored in what is now the Foreign Correspondents and Fringe Clubs at the top of Ice House Street.