Chairman-of-Everything-for-Life Xi Jinping declares that China must and will annex Taiwan – under threat of military force – under a ‘One Country Two Systems’ model. Taiwan says ‘no thanks’. Hong Kong’s South China Morning Post produces a hasty torrent of comment (blah, blah and blah) endorsing 1C2S as a formula made in heaven for the lucky Taiwanese.

According to legend, the 1C2S concept has ‘evolved’ since the 1970s as a theoretical framework to fit Taiwan and Hong Kong into the PRC, with Deng Xiaoping first using the actual phrase in 1982.

It is more a vague slogan than a clear constitutional mechanism. After the UK and China signed the handover deal in the early 1980s, officials explained that 1C2S would allow Hong Kong to keep its existing capitalist system and way of life. Optimists and cheerleaders encouraged the belief that this principle, coupled with ‘a high degree of autonomy’, meant Hong Kong would be insulated from Beijing’s interference in all matters apart from foreign affairs and defence. 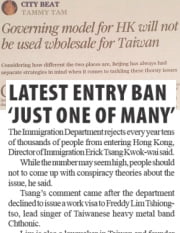 To no-one’s great surprise, the Taiwanese have zero interest in having their free and democratic system eroded this way. They are also aware that Beijing once promised broad autonomy to Tibet and Xinjiang.

In Hong Kong, local officials are getting frustrated by international media and other commentary suggesting that 1C2S has changed in any way. The local administration is in a bind: it must take ownership of the prosecution, immigration and other decisions, yet it can’t openly admit that these represent shifts in policy. Chief Executive Carrie Lam and her colleagues are reduced to flatly denying that anything has changed, and that these things that haven’t changed have not damaged rule of law or freedom of expression.

Today’s desperate attempt to convince us that Mainlandization isn’t happening comes from the Immigration Department. Observers have pointed out that the department now enforces Chinese Communist Party orders to keep out hostile elements with incorrect thoughts, such as the Financial Times’ Victor Mallett and Taiwanese musician-lawmaker Freddy Lim. In response, whiny Immigration officials loudly over-protest that there is no conspiracy (no-one says there is) and most of the people it kicks out are smugglers and baddies (which no-one disputes).