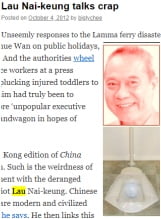 Lau Nai-keung, CCP hyper-loyalist and spite-filled tormentor of Hong Kong’s ‘dissidents’, dies. Few writing in English paid him much attention (forgivably), so I will dig up a few old bits and pieces by way of a eulogy…

…what the SCMP gives us is Lau Nai-keung – patriot, scourge of pro-democrats, and compelling study in mental fracturing, week by week, column by column.  Just when you thought his mouth-frothing hatred and loathing for the world couldn’t get any more pathological, he manages to get just that little bit more psycho.  It is far and away the best reading in the newspaper… [from here]

While Lau cannot exactly be described as the voice of reason, his mouth-frothing loathing of the pro-democrats often takes precedence over his loyalty to the motherland, with the result that he speaks unpalatable truths that the more self-controlled pro-Beijing figures avoid uttering. [from here; another example here]

Is there anyone he doesn’t loathe? That he detests the pro-dems and the tycoons isn’t news, but he doesn’t even rule out the local administration – or even the Beijing officials who recently resurrected the zingy love-country-love-harbour catchphrase. Whether you accept 0%, 50% or 100% of his outpourings, you can’t deny the anguish. Everyone else on the more-or-less patriotic side is gearing up for soul-selling, principles-shredding compromise, leaving him the only true believer shining in the darkness. [from here]

Also: Lau Nai-keung Talks Crap, after the great man ranted about evil Westerners in the context of toilets. There’s much more, but I’m in a good mood today.

Lau’s passing is an opportunity to examine how some Hong Kong people mutated into ardent Beijing sympathizers – before it became de rigueur in the years around 1997 (think Tsang brothers, CY Leung, etc). Which we will do tomorrow, probably.