Just as the Tai Kwun cultural heritage hub-zone was banning author Ma Jian (statement here), Hong Kong immigration officials were questioning the previously-expelled Financial Times correspondent Victor Mallett and turning him away at the airport. Ma is due to land here this afternoon.

If asked, the local administration will continue to insist that: a) nothing unusual is happening at all, you’re just imagining it; b) these things you’re just imagining are isolated and not linked and very minor and specific, so just ignore them; and c) the repression that isn’t happening is all in accordance with the law, and rights and freedoms remain intact.

It would look so bad if Ma were refused entry (not sure if he has permanent residency) that it would be surprising if they barred him. Except it wouldn’t be.

If it were free to bolster whatever credibility it still has, the Hong Kong government could justifiably point out that our Mainlandization so far has been extremely restrained and subtle. For proof, Louisa Lim (People’s Republic of Amnesia) outlines how Beijing is trying to eliminate non-Han culture in Xinjiang.

If you scroll down here, a People’s Daily editorial will enable you to ‘Correctly Understand the Xinjiang History Question’ (original here). It essentially replaces the mainstream and academically accepted account of the region’s past with a fiction. For example: “…all of the ethnic cultures of Xinjiang take root in the fertile lands of Chinese civilization and are an inseparable part of Chinese culture.”

(We will leave aside the fact that Beijing’s official Han/Chinese and CCP historical narratives – with Deng Xiaoping currently being airbrushed out – are all synthetic anyway.)

Xinjiang’s Uighur and Kazakh cultures clearly form part of a bigger Turkic region in Central Asia along with Uzbeks, Turkmens, Azerbaijanis, Kyrgyz, etc. These peoples are probably descended from various Mongol, Indo-European and other nomads who turned up over millennia. At some point, a dominant culture – the Huns, or someone – spread a common (Turkic) language throughout the area. More recently, other outsiders passed through and introduced Islam and such features as Arabic script.

Whatever the exact chain of events, this is not ‘rooted in Chinese civilization and culture’, unless you define ‘Chinese’ to include the land and populations of over half a dozen independent countries stretching west beyond the Caspian Sea. In order to re-program Uighurs, the Communist Party needs to revise its own nation’s – and ultimately everyone’s – history and archaeology accordingly.

Hong Kong has a long way to go – but it’s the same playbook.

I declare the weekend open with the usual gripping reading…

A good explanation of why sea transport beats rail (or why Beijing’s Eurasian ‘Silk Road Belt’ is absurd). Thus informed, you won’t be shocked to learn that, not content with shoveling reserves into pointless local infrastructure projects, Hong Kong officials now want to chuck taxpayers’ money into ‘Belt and Road’.

Some interesting thoughts prompted by a UK speech by Wang Dan…

American politicians do not feel the need to loudly proclaim that ‘Kansas is an inalienable part of the United States’. Theresa May does not loudly trumpet the loyalty of the Royal Navy to the government of the day. Communist Party leaders are virtually unique in the international community in endlessly spotting grave insults to the ‘feelings of the Chinese people’.

To which we could add, only Beijing has ‘seven taboos’ and is so scared of an 88-year-old woman, they have to silence her. Stein Ringen elaborates in Perfect Dictatorship.

Seeing Henry dropping by the Great Hall of the People brings back memories. Remember the days when it was cool and a mark of sophistication and enlightenment to ‘understand’ the Chinese regime and sneer at those repelled by Leninist thuggery as Cold War relics? Here’s an intriguing look at the most odious extremes of that Panda-hugging shoe-shining sycophancy (as embodied by Australian politician Bob Carr – but it could be anyone).

That article mentions John Garnaut, who delivers the weekend’s big read – a sweeping overview of how the CCP and its United Front are undermining free societies (as embodied by Australia – but it could be anyone). 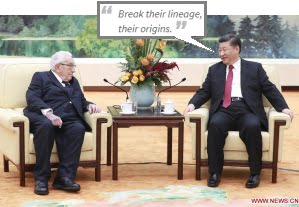