The bright side: Winnie the Pooh still allowed in HK 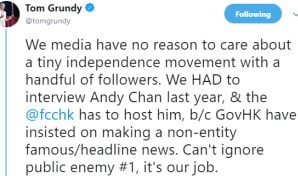 By taking steps to ban the Hong Kong National Party, the Chinese/Hong Kong government has turned Andy Chan and his little pro-independence group into a big news item. Beijing and local officials are now criticizing the Foreign Correspondents Club for planning an appearance by Chan. Thus, they turn it into a story about their own attempts to muzzle the media.

Hong Kong’s officials would have seen that coming. But their Beijing masters are in charge, and the local administration is reduced to following orders without question.

As well as heightened media attention, the Andy Chan lunch could attract ‘patriotic’ protestors, an intimidatory police presence, and much mouth-frothing from Beijing’s locally based diplomats, who see the FCC as within their barbarian-handling remit. If the government felt vindictive, it could evict the Club from its premises. As a fatal blow, baleful former Chief Executive and occasional Club member CY Leung could turn up in the main bar more often.

Court cases and other complications notwithstanding, the outcome is that Hong Kong will probably not only start to ban dissident groups, but start to limit press coverage of them – and thus their opinions, and subsequently other subjects. In the name of ‘red lines’ and national security, this is where active censorship and criminalization of ideas begin.

While it’s difficult to feel sorry for Chief Executive Carrie Lam and her colleagues, it is tragic to witness their obvious helplessness. The kindest interpretation is that the local officials have given up trying to convince Beijing that a more proactive Mainland-style crushing of dissent will be counterproductive here. Now they must watch as Beijing shreds their longstanding – and once no doubt sincere – commitments to uphold press and speech freedoms in Hong Kong.

By contrast, as his energetic intrusion into the episode shows, CY is enjoying this. He presumably feels that the FCC/Andy Chan issue vindicates his original warnings on separatism. His ‘father of Hong Kong independence’ tag suggests they were self-fulfilling. Maybe he is fantasizing that he and the Communist Party’s United Front have cunningly crafted and executed the whole train of events to enable the dismantling of Hong Kong’s freedoms. Or maybe it’s not a fantasy.

5 Responses to The bright side: Winnie the Pooh still allowed in HK