When Hong Kong’s tycoons switched allegiance to the Chinese government back in the 1980s-90s, they were mocked as ‘instant-noodle patriots’. They were simply doing what they had to, like generations of overseas Chinese in Southeast Asia – shoe-shining whoever was likely to be charge in order to keep the family business safe.

Hongkongers with less materialist values mostly stuck to their principles. Mainstream pro-democrat professionals and activists still demand free elections and fight for rule of law, long after it has become obvious that the regime in Beijing is intent on merging the city into its Communist structure.

A few people in the liberal-pluralist camp have tried to shift themselves into a position of constructive engagement with the sovereign power. It is a slow and awkward process. Perhaps we could call them ‘steamed-dumpling-that-had-to-be-defrosted-first patriots’.

Best-known perhaps is Ronny Tong, formerly of the Civic Party, who embraced a naïve/mythical/cynical ‘third way’ and now serves as an apologist for Beijing’s dismantling of rule of law here. (Needless to say, the Communist Party does not do ‘third way’ even-handed middle-of-the-road fence-sitting honest brokers – either you kowtow or you are hostile, and that’s that.)

Another was Anthony Cheung, a Democratic Party founder who was moderate enough to become a minister in the last administration, and whose typically unexciting thoughts on housing appear in a South China Morning Post interview today. (He hardly counts as he was an academic with no noticeable lust for power.) 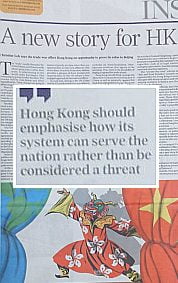 The paper also carries an op-ed piece by Christine Loh, a one-time trendy lawmaker and policy wonk who swallowed her pride to accept the futile and demeaning job of junior deputy assistant sub-minister for the environment, also in the last administration. The article illustrates the impossible contradiction facing someone who has ideals and ideas – and the ambition to take part in Hong Kong’s Communist-appointed and -vetted ruling system. (Even compared with CY Leung’s leadership five years ago, the Hong Kong government today is 100% compulsory bland, obedient, ideas-free mediocrity.)

She uses the big ‘trade war’ story of the day to offer a nifty if predictable win-win triangulation: Hong Kong keeps its groovy freedoms by making them useful rather than threatening to the Leninist dictatorship slowly crushing the life out of the place. With quick mentions for ‘Belt and Road’ and ‘Bay Area’ to show extra sincerity. Sounds good. Sounds productive. Sounds pragmatic. Sounds, perhaps, like a refreshing dash of talent to spice up a clueless cabinet? Or, presumably, sounds like a foreign-influenced poisonous-weed infiltrator trying to undermine the Party’s struggle to control the wayward territory.