Today’s lesson: what does Article 136 say?

A week ago, Hong Kong Chief Executive Carrie Lam assured the public that she had no plans to expand ‘National Education’, the euphemism for Communist Party-approved brainwashing of kids. Now China’s Education Minister – one Chen Baosheng – contradicts her by ordering local public schools to strengthen their teaching of Chinese history, culture and constitution. (He also mentions the Basic Law, so the little ones will presumably learn the correct reading of Article 136, which appears to state that the Hong Kong government has full autonomy over the city’s education policy, but obviously means something else).

Thus she puts him in his place, since as CE she is on a par with a Vice Premier and outranks him. Or at least, that’s how it works in theory – but that’s what they said about Article 136.

Carrie’s mission here is to convince the leadership in Beijing that she is indeed imposing ‘National Education’ on Hong Kong’s impressionable little minds, while at the same time convincing Hong Kong parents that she isn’t.

Logically, this must mean misleading one side or the other. As a hand-wringing bureaucrat, she probably hopes to find some sort of loosely defined grey area/question of balance/compromise/let’s-change-the-subject/win-win outcome that makes everyone happy. As a politician, she might (indeed damn well should) plan to dump this on the new patriotic loyalist Education Undersecretary Christine Choi, whose over-eagerness to cram Communist brainwashing propaganda down schools’ throats could easily prompt a backlash and victory for the pan-dems.

Unless, of course, the pan-dems manage to mishandle the issue… 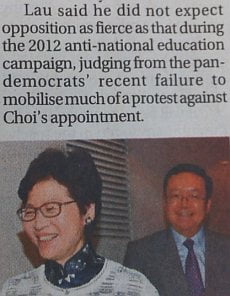 6 Responses to Today’s lesson: what does Article 136 say?