According to the South China Morning Post’s calculations, at least nine more Hong Kong Legislative Council members could be at risk of disqualification for retroactively incorrect oath-taking. That’s in addition to those already being barred from office. 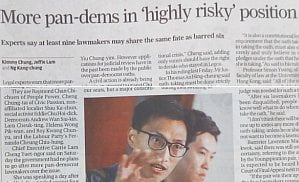 In some ways, it would be great if this happened: the disappearance of over a dozen popularly elected (and several quite smart) members would conclusively expose the Legislative Council as a rigged rubber-stamp body, and deprive the whole political structure of any remaining shreds of credibility. More likely, the Communist Party will hope that by axing a few, it can intimidate the others into playing along with an increasingly Mainland-style fake representative system. (If they are doing their United Front work diligently, Beijing’s local officials will have sorted these enemies into different groups to be expunged, turned against one another, or possibly tamed and lured into submission.)

For a detailed breakdown of how the government can take advantage of a neutered legislature, see here. But the powers that be are in a quandary. In theory, they can ram through ultra-sensitive measures like Article 23, national education or quasi-universal suffrage – but only at the risk of provoking street protests. And it would dash hand-wringing Chief Executive Carrie Lam’s already-desperate hopes of uniting everyone behind livelihood issues. In their obsessive determination to attack and crush splittists, the Liaison Office enforcers are making Hong Kong less governable rather than more effectively authoritarian.

Oath-Gate is doing even greater damage to Hong Kong’s legal system – making it clear that Beijing is willing and able to re-write the law and apply it retroactively for purely political reasons. While idealists and purists quoted by HK Free Press might complain, the Progressive Lawyers Group’s Kevin Yam is surely realistic when he says local courts are ultimately powerless. This is how a one-party state and Leninist dictatorship uses the law.

First: is there still any reason for critics of government in Hong Kong to engage in formal, constitutional politics? Even the old traditional Democratic Party moderates must be wondering whether constructive participation within ever-tightening rules makes sense. Why lend the system credibility as Beijing makes it less representative?

Second: if the Communist Party can trash Hong Kong’s legal principles over lawmakers’ oaths, when else might it, on a whim, rewrite the law and hijack the courts? The unofficial-official reassurance is that splittists crossed a ‘red line’, and Beijing will continue to respect rule of law on this side of the border in all other respects (leaving aside occasional can’t-be-helped abductions). But having done it this sweepingly on this occasion, and finding it so easy and effective to impose ‘rule of man’ here, can a paranoid one-party dictatorship restrain itself in future?

17 Responses to Oath-Gate and some questions