While Hong Kong itself is the main victim of this misfortune, maybe we should spare a thought for the gullible or grasping idiots who took on the job.

There was avuncular bumbler Tung Chee-hwa (1997-2005) whom fate pummeled so mercilessly most of us had to look away. Then Donald Tsang (2005-2012), an arrogant bureaucrat with no policy ideas (hold that thought). And CY Leung (2012-2017), who, apparently out of some misguided hyper-loyalty to the Communist cause, tried to unleash a mini-Cultural Revolution on the city and managed to start a pro-independence movement.

Although different in style, their administrations had three themes in common: struggling to reconcile Beijing’s neuroses and local expectations; obsessively propping/pushing up housing costs; and floundering in all other respects.

Now it is the turn of Carrie Lam-to-the-slaughter. After three failures, China’s leaders have decided they might get lucky at last by picking someone who combines Donald’s haughtiness and lack of ideas with CY’s mindless obedience – perhaps in the hope that a feminine touch might also yield a dash of Tung-like geniality. Carrie has been frequently stressing her wish to heal divisions, which is a coded way for her (and the puppet-masters in Beijing) to step back from CY Leung’s clumsy Leninist/United Front clampdown on dissent as counterproductive, which presumably prompted his departure after just one term. 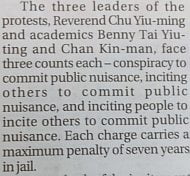 Conspiracy Theory 1 is that this is Carrie’s doing, as she didn’t want to spoil her quasi-election but now can’t wait to continue CY’s rabid persecution of opponents. Conspiracy Theory 2 is that CY and his Liaison Office United Front comrades are desperate to get on with their ideological rectification campaign after holding back during the quasi-election campaign out of deference to Beijing’s wishes to minimize public support for John Tsang. Conspiracy Theory 3 is that CY and buddies are deliberately trying to undermine Carrie. Conspiracy Theory 4 is that they are all in it together, and the plan is to make Carrie look good by taking office on July 1 amid a sudden end to psychopathic Communist mouth-frothing and an instantaneous wave of peace, goodwill and unity spreading over the city. You can think up Conspiracy Theories 5, 6, 7, etc yourself.

Carrie seems vaguely uneasy with the arrests, as does Legislative Council president Andrew Leung, who as a clueless, taken-for-granted shoe-shiner and bystander has no special axe to grind here.

To complicate things, the authorities are also arresting (now ex-) cop Franklin Chu on charges of assaulting someone in 2014. This comes after the alleged victim threatened a private prosecution. And these all follow the convictions of Ken Tsang, and of his seven police assailants (by evil foreign judge etc), also dating from Occupy.

If current and future CEs and Beijing’s officials are organizing and coordinating a fiendish strategy here, they are being immensely incompetent. It looks more as if petrified Justice/prosecutions officials are trying to toss pieces of meat at growling pro-Communist and human-rights lobbies while tiptoeing through the minefield of a quasi-election and uncertainty about life post-CY. But immense incompetence from on high is perfectly believable.

Whatever it is – Carrie’s uncommon bad luck begins already.